[RETAINED DRAFT, COMPLETELY IN JAY'S HAND, OF AN AUTOGRAPH LETTER FROM JOHN JAY TO REV. JOHN T. KIRKLAND, PRESIDENT OF HARVARD UNIVERSITY, RECALLING FUNDAMENTAL POLITICAL DISCUSSIONS OF 1776 AND 1777, INCLUDING CONTENT ON THE BICAMERAL NATURE OF THE AMERICAN CONGRESS] 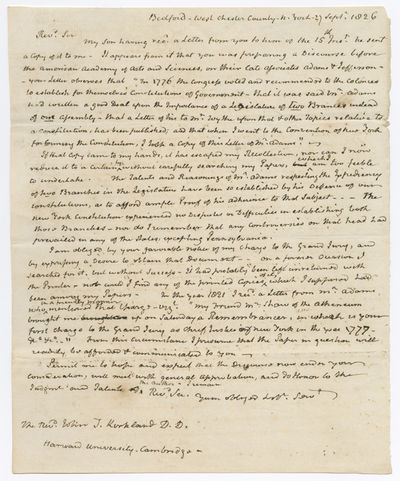 by [Jay, John]
Bedford, N.Y., 1826. [1]p., docketed by Jay on verso. Old folds. Two minor ink smudges. Near fine. In a cloth chemise and half morocco and cloth slipcase, spine gilt. A historically-important retained draft of a letter by Founding Father John Jay. One of the last extant letters from Jay before his death on May 17, 1829, here he recounts one of the fundamental political discussions of the crucial year of 1776, in which the Founders debated the merits of a bicameral legislature. Jay recounts the importance of John Adams' arguments in favor of legislatures made up of two separate bodies, a structure that was in fact adopted in most of the future states and in the United States Congress as well. This draft, unsigned but entirely in John Jay's hand, was his working copy of the letter he eventually sent Kirkland - it contains cross-outs and emendations showing the process through which Jay conceived and wrote the letter.

The letter is addressed to Reverend John T. Kirkland, the long-serving president of Harvard University. Jay and Kirkland could have met personally as fellow members of the American Academy of Arts and Sciences or possibly the American Antiquarian Society (AAS); Kirkland was a founding member of AAS in 1812, and Jay was elected two years later.

In the present letter Jay responds to Kirkland's request for original documents relating to two important instances in Jay's career. The first concerns the fateful discussions of the legislature in 1776, which Kirkland was curious about because, as Jay writes, "It appears that you was preparing a Discourse before the American Academy of Arts and Science on their late associates Adams & Jefferson." Adams and Jefferson had both recently passed away on the same day - July 4, 1826. Kirkland would use the information received from John Jay in this letter to compose his "A Discourse in Commemoration of John Adams and Thomas Jefferson" on October 30.

"Your letter observes that 'In 1776 the Congress voted and recommended to the Colonies to establish for themselves Constitutions of Government - that it was said Mr. Adams had written a good deal upon the Importance of a Legislature of two [underlined] Branches instead of one [underlined] assembly - that a Letter of his to Mr. [George] Wythe upon that & other Topics relative to a Constitution has been published; and that when I went to the Convention of New York for forming the Constitution, I took a copy of this Letter of Mr. Adams.'"

In the last clause of this quoted section Jay seems to be referring to himself in the first person when he writes about supposedly taking Adams' letter on bicameralism to the first New York state constitutional convention, which was held sporadically throughout the latter half of 1776 and into late April 1777, as British forces continually threatened New York. Jay was one of the three authors of the New York state constitution, along with Robert R. Livingston and Gouverneur Morris; together these three created a government in New York that included a bicameral legislature. In any case, Jay writes that he does not possess the letter to which Kirkland is referring, and that he is "too feeble to undertake" a search of his personal papers.

Jay continues with further comment on John Adams and the importance of a bicameral congress, and the power the idea had in the writing of the New York state constitution:

"The Talents and Reasonings of Mr. Adams respecting the Expediency of two Branches in the Legislature have been so established by his Defence of our Constitutions, as to afford ample Proof of his adherence to that subject - - - The New York Constitution experienced no Disputes or Difficulties in establishing both those Branches - nor do I remember that any controversies on that head had prevailed in any of the states, excepting Pennsylvania."

In the present letter Jay also discusses his famous 1777 Charge to the Grand Jury of New York, one of Jay's first acts as Chief Justice of the New York Supreme Court. Jay rallied those who feared a permanent break from the Crown by highlighting the exceptionalism of their political experience; in no other place except America could a people shape their own government. Here Jay bemoans the loss of the original document, which he states he searched for previously, but without success. Evidently Kirkland's previous correspondence to Jay included a request for the original Grand Jury charge, as Jay responds to Kirkland's "desire to obtain that document." Jay then recalls a letter from John Adams in 1821 in which Adams told Jay that there is a printed copy of the Charge at the Boston AthenÃ¦um, per the AthenÃ¦um's founding librarian, William Smith Shaw. Besides preparing for his speech before the American Academy of Arts and Sciences, Kirkland could have been trying to acquire the original document for himself or for AAS; notable Americans of Kirkland's generation often requested original documents from Founding Fathers.

John Jay (1745-1829) played several critical roles during the Revolutionary and Federal periods, and his impact on American governance is often underrated. An early patriot, the New York-trained lawyer was a member of the New York Committee of Correspondence and served as President of the Second Continental Congress. Jay drummed up financial support for the American Revolution in Spain - as his counterpart, Benjamin Franklin, did in France - later honing his diplomatic skills by negotiating the 1783 Treaty of Paris, and by serving as Acting Secretary of State before Thomas Jefferson's return from France. Jay contributed at least five of the articles collectively known as the Federalist Papers, and was the first Chief Justice of the United States Supreme Court, serving from 1789 to 1795, also negotiating the Jay Treaty towards the end of his term. He then served six years as Governor of New York before abruptly retiring from politics to live out his life as a farmer.

John Thornton Kirkland, born in 1770, graduated from Harvard at age nineteen. By 1792 he was hired as a tutor of Logic and Metaphysics in Cambridge. During his time as a teacher at Harvard, Kirkland would deliver sermons as a pastor at the New South Church in Boston. Between 1810 and 1828, Kirkland served a well-regarded tenure as president of the university, during which he was known for being lenient to students, and after which he was fondly remembered by the likes of 1829 Harvard graduate Oliver Wendell Holmes.

The present letter is discussed in great detail by one of its previous owners, Douglas F. Rohrman - a former lawyer, collector of presidential and political letters, and vice president of The Manuscript Society - in an article for MANUSCRIPTS entitled "John Jay's Reminiscences," a copy of which is included here.