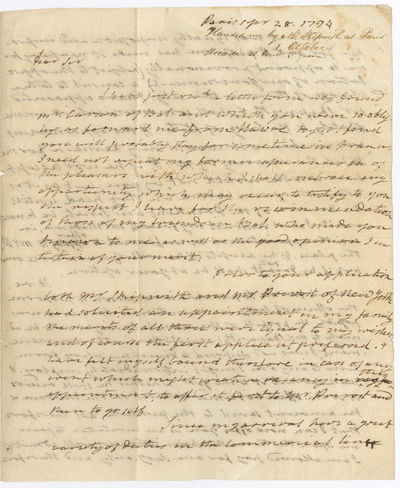 by Monroe, James
Paris, 1794. [3]pp. on a folded folio sheet, docketed on the blank fourth page. Old folds. Short separations along folds, light creasing. Very good. In a half red morocco and marbled paper folding case, spine gilt. A lengthy and friendly correspondence from James Monroe during the early part of his tumultuous two-year term as Minister to France for President George Washington's fledgling American government. Appointed by Washington to succeed Gouverneur Morris, Monroe arrived in Paris shortly after the fall of Robespierre. Just a few months into his term, in August 1794, Monroe made his infamous speech in which he overpraised the French republic, and it haunted the remainder of his tenure; at this time, it was the policy of Washington's administration to maintain strict neutrality in international affairs. This speech, along with a series of diplomatic moves with which President Washington disagreed, led to Monroe's recall from France in 1796.

Here, a month after making his controversial speech, Monroe writes to Baltimore native John Henry Purviance to gauge his interest in potential employment in France as Monroe's secretary. Monroe writes: "Since my arrival here a great variety of duties in the commercial line and which it was equally impossible and improper for me to perform has made it necessary for me to appoint provisionally (subject to the approval of our government) a consul to take charge of them in this city." Monroe adds that his first choice for the consul position is Fulwar Skipwith, who in fact became Consul-General in Paris in 1795, and who Purviance notes (in manuscript, at the head of this letter) was the person who delivered this letter from Monroe to him.

Monroe continues that the appointment for a consul, if successful, would require him to "provide some person to perform the office of Secy. in the interim." Monroe admits he is also considering John Bartow Prevost for the secretary position "if he would accept it & in case he would not" the position would go to Purviance. Monroe acknowledges heartily a recommendation from "Mr. Curson of Bal" that named Purviance for the potential secretary vacancy: "I need not repeat my former assurances of the pleasure with which I shall embrace any opportunity which may occur to testify to you the respect I have for the recommendation of my friends in Bal: who made you known to me, as well as the good opinion I entertain of your merit."

Somewhere along the way Monroe did not offer the secretary position to Prevost, even though he was being urged to do so by Aaron Burr, Prevost's stepfather. Perhaps it was precisely because Burr was pressuring Monroe to hire Prevost that he did not; Monroe's opinion of Burr was decidedly negative. Ultimately, the recruitment effort worked, and by November, Purviance was Monroe's private secretary in Paris. Purviance would also serve in the same capacity for Monroe during his term as minister to England in 1803-04. Correspondence between Monroe and John Henry Purviance is recorded in the Papers of James Monroe, but this letter is unknown to them, and it is not listed in the Founders Online website.

A rare glimpse into the nuts and bolts of the diplomatic machinery of the young United States. (Inventory #: WRCAM54977)
$6,750.00 add to cart or Buy Direct from
William Reese Co. - Americana
Share this item