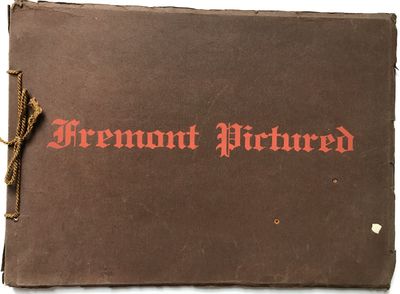 by [Nebraska]
Fremont: Hammond Printing Company, 1910. Very good.. [106]pp. plus folding plate. Oblong quarto. Original brown printed wrappers, tied with cord. Light chipping and wear to covers and spine. Some light internal wear, first page soiled. "Fremont is a city of 12,000 inhabitants possessing advantages and ambitions that distinguish it as a place of certain future development, conservatively speaking, and even larger probability." Extensive pictorial promotional work for the town of Fremont, often lauded as the most beautiful city in Nebraska. The work is comprised almost entirely of half tones depicting all aspects of the town, including many very ordinary residences -- an unusual feature in such a work. The folding plate is a large panoramic image of the plant of the Fremont Brewing Company, showing the brewery, ice plant, engine house, malt house, office, and bottling house. Rare, with two copies located in OCLC, both in Nebraska libraries. (Inventory #: 1070)
$650.00 add to cart Available from
McBride Rare Books
Share this item

Tacoma : October , 1926
(click for more details about Permanent Residence? The Tacoma Japanese Times)
View all from this seller>