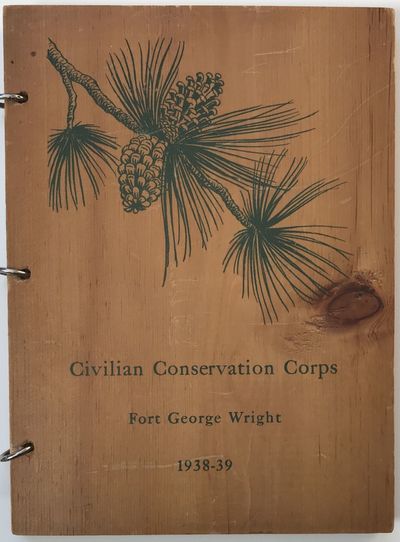 by [Civilian Conservation Corps]
[Spokane], 1938. About very good.. 96pp. Quarto. Original pictorial wrappers three-ring bound into decorative wood boards. Light wear to wrapper edges; wood boards lightly scuffed. Numerous newspaper clippings tipped onto several leaves, inside wrappers, and on title page. Occasional, slightly later manuscript annotations. Light dust soiling and toning internally. A scarce 1938 Civilian Conservation Corps annual for companies headquartered in the Fort George Wright District in the Pacific Northwest. Units of the CCC were first established in Washington state in 1933, and by 1938 there were over 260 companies with approximately 46,000 members in areas of eastern Washington, northeastern Oregon, Idaho, and western Montana that made up the district. These companies were involved in a wide variety of projects relating to land and infrastructure improvement; conserving wildlife; managing forests; and conserving soil. "The Ft. George Wright District was responsible for the clearing and creation of many roads, bridges, and campsites, with the men of Camp Seven Mile creating Riverside State Park and the roads and buildings at Mount Spokane State Park. Soil conservation, fire and flood control, and reforestation helped reduce hazards and promote the health and safety of the Northwest's forests: blister rust control saved over 200,000 acres of white pine timber in the first six years of the Ft. George Wright program alone" - Spokane Historical Society. The present annual contains descriptions and illustrations of life at Seven Mile, Washington; Devil's Elbow, Idaho; Beauty Bay, Idaho; Kalispell Creek, Idaho; Blowdown, Washington; and fifteen other rural camps. Each company receives four pages of the work, which contain a history of the unit, an account of its projects over the past year, groups portraits of its members, and numerous photographic illustrations of its activities. The initial leaves provide an account of the main camp, its officers and staff, and also contain descriptions of large-scale CCC projects at Kaniksu, Coeur d'Alene, and Coville National Forests, and of soil conservation efforts across the district (Regional Conservator in Charge, J.H. Christ!!). The present copy belonged to an unidentified member of a Fort George Wright company, who kept track of fellow members by tipping in numerous newspaper clippings about their later activities, particularly their wartime fates and accomplishments. The pine boards into which the annual was inserted were donated by regional lumber companies in appreciation of the work completed by the CCC for their benefit. OCLC locates only three copies, at Washington State, North Dakota State, and Spokane Public Library. (Inventory #: 1003)
$950.00 add to cart Available from
McBride Rare Books
Share this item