Voyages to the Coast of Africa, by Mess. Saugnier and Brisson... 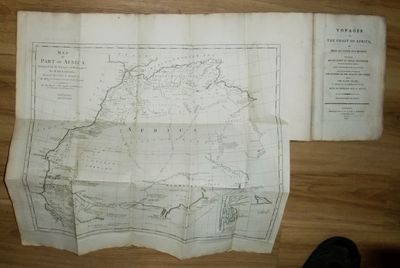 Translated from the French edition of 1791. "Containing an account of their shipwreck on board different vessels, and subsequent slavery, and interesting details of the manners of the Arabs of the desert, and of the slave trade, as carried on at Senegal and Galam." In two separate narratives. An early and important account of Arab captivity and African slave trading, with details on the economic aspects of the trade. Huntress recounts the shipwrecks off Morocco that got them into trouble in the first place. Apparently Brisson received rough treatment from his captors; Saugnier fared somewhat better. They both eventually reached Mogadore (Essaouira) in Morocco and were rescued by the French. Huntress notes that Brisson "reached France in 1787, and courageously sailed again for Senegal." I don't know how much of a factor courage played, since he went back into the slave trade there. See Huntress 114C, Cox I, p. 391. A very good copy, pages untrimmed. Bound in original boards with tape-repaired backstrip. The folding map has one short tear on the gutter margin and is otherwise in excellent condition. (Inventory #: 41157)
$750.00 add to cart Available from
Ten Pound Island Book Co.
Share this item

Newport : Preservation Society of Newport County , 1954
(click for more details about The Arts and Crafts of Newport Rhode Island 1640-1820.)
View all from this seller>