THE GUNBOAT CANDIDATE AT THE BATTLE OF MALVERN HILL 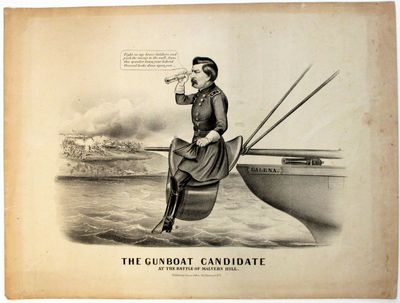 "Democratic presidential candidate George Brinton McClellan is lampooned as an incompetent military leader. He sits in a saddle mounted on the boom of the Union ironclad vessel Galena... He calls to his troops, 'Fight on my brave Soldiers and push the enemy to the wall, from this spanker boom your beloved General looks down upon you'... The print recalls two prominent failures in McClellan's tenure as commander of the Army of the Potomac, which haunted him during the 1864 campaign" [Reilly].
The Union ironclad 'Galena' suffered severe damage from Confederate batteries and was forced to withdraw from the approach to Richmond in May 1862. McClellan failed to bring nearby land troops to the Navy's aid. Soon thereafter, at the "disastrous conclusion" [id.] of the Peninsular Campaign, his troops were badly routed at the Battle of Malvern Hill, depicted in the lithograph's background.
Reilly 1864-17. Weitenkampf 145. OCLC 191119909 [4- AAS, Clements, Peabody-Essex, DLC] as of October 2019. (Inventory #: 36313)
$1,850.00 add to cart or Buy Direct from
David M. Lesser, Fine Antiquarian
Share this item
David M. Lesser, Fine Antiquarian Books LLC
Offered by