Narrative of a Journey to the Zoolu Country, in South Africa. Undertaken in 1835 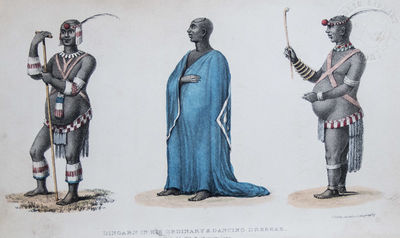 by Gardiner, Allen F.
London: William Crofts, 1836. Ex-Library First edition. Hardcover. g- to vg. Octavo. iv, 412pp., 26 plates, incl. frontispiece, three of them in color, 2 folding maps. Rebacked three-quarter leather, retaining marbled boards with gilt lettering on black label of spine; raised bands. Tan endpapers. Color frontispiece. Allen Francis Gardiner (1794-1851) was a British Royal Navy officer and missionary. "... the object of my journey-an endeavor, under the blessing of God, to open a way whereby the ministers of the gospel might find access to the Zoolu nation..." (Gardiner). Gardiner succeeded to establish the first missionary station at Port Natal but was unsuccessful in establishing Christian churches in Zooluland. The maps in this volume have been taken from Arrowsmith's map enlarged, and the remainder filled up generally from personal observation. The plates are from sketches taken on the spot, but, in many instances, reduced to suit the size of the volume. Illustrated with twenty-six lithographic plates, three of them hand-colored, and two folding maps printed by C. Hullmandel. The color plates depict Zulus in various dresses as well as hair styles, the b/w lithographs scenic views as well as cultural features of the Zulus, including housing, utensils and vegetation. All lithographs blind-stamped Public Library Worchester. Errata slip tipped in after preface. Altogether 28 nicely inked additions of years to printed dates in the text. One plate with three inch closed tear, reinforced with tape on verso. Small closed tears of large folding map and light creasing at edges. Binding with leather at corners missing, light wear along edges and marbled boards rubbed with some scuffing. Very light, sporadic foxing of block. Binding in overall good-, interior in very good condition. (Inventory #: 46162)
$600.00 add to cart or Buy Direct from
Eric Chaim Kline Bookseller
Share this item