Seeking the Golden Fleece; a Record of Pioneer Life in California: To which is added, Footprints of Early Navigators, other than Spanish in California. With an account of the Schooner Dolphin 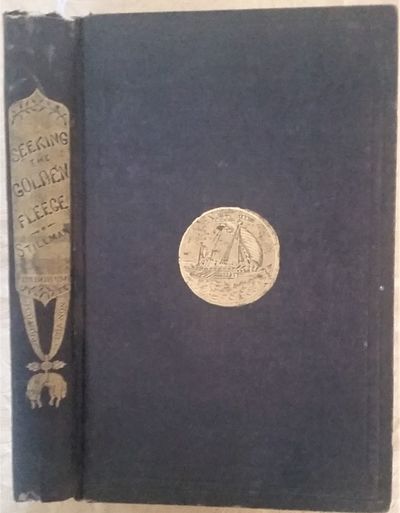 by Stillman, J. D. B.
San Francisco & New York: A. Roman & Co, 1877. 8vo. 230 x 145 mm., (9 x 6 inches). 352 pp. Illustrated with four plates and one vignette. Original cloth with embossed medallion on upper board in gitl, gilt title on spine; head and tail of spine worn away, cloth a bit dull; with faults a good sound copy. This copy is inscribed to "R. C. Rogers with the compliments of the author." First edition. Written about 25 years after his experience as a Argonaut in California, Stillman's account is both authentic and very valuable as a document of the experience of miner's like himself who wrote home describing the trials, tribulations, and triumphs that were experience by this enterprising group of men in the 1850's. He based his book on manuscripts that survived over the years and revealed the personal stories that were so sought after by the public. "Significant memoirs of an early California physician who had a notable career in his adopted state." Wheat Howes S-1006. Wheat, Book of the California Gold Rush, 199. (Inventory #: 384)
$250.00 add to cart Available from
De Simone Company
Share this item
De Simone Company, Booksellers
Offered by