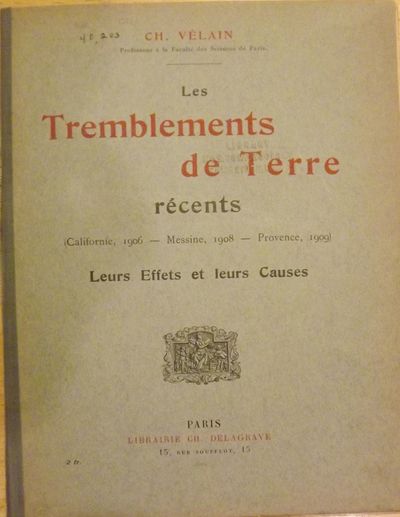 by VELAIN, Charles
Paris: Librairie Ch. Delagrave, 1909. First Edition. Signed presentation from Velain on the upper corner of the title, to Professor W.M. Davis, who was a professor of geology at Cambridge University. Charles Vélain [ May 1845- 1925] was a French geologist and geographer. He was born in Château-Thierry. Charles Vélain's route to the field of geology was an unusual one. He was a student of pharmacy. He studied geology later at the Sorbonne. He was part of several explorations, during which he studied various geological factors that would later bring him fame. Small quarto: blue printed wraps, nice cloth binding strip along the spine. Illustrated With Photographs. An Extract from the annual "Revue de Geographie." A study of volcanoes in California in 1906; in Messine in 1908, and in Provence in 1909. A very scarce title!. Very Good (contents clean & tight; blindstamp of the Museum Of Comparative Geology on front cover, along with a tiny call number). (Inventory #: 56673)
$275.00 add to cart or Buy Direct from Antic Hay Books
Share this item
Antic Hay Books
Offered by

THE SENATOR NEXT DOOR: A MEMOIR FROM THE HEARTLAND

NY : Henry Holt & Company , 2015
(click for more details about THE SENATOR NEXT DOOR: A MEMOIR FROM THE HEARTLAND)
View all from this seller>