After Dark: the national magazine of entertainment vol. 10, #4, August 1977: Ann-Margaret 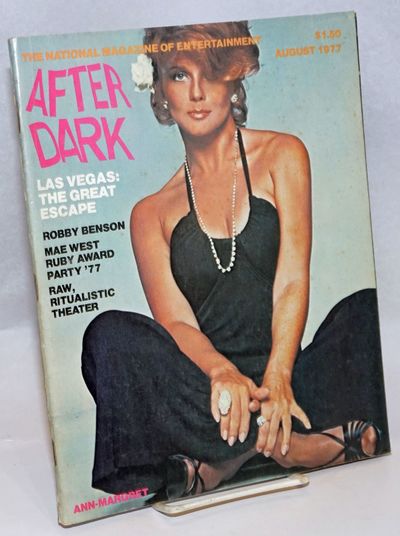 by Como, William, editor, Ann-Margaret, Robby Benson, Patrick Pacheco, Norma McLain Stoop, et al.
New York: Danad Publishing, 1977. Magazine. 100p. including covers 8.5x11 inches, articles, features, reviews, listings, illustrated with b&w photos and ads, very good semi-glossy entertainment magazine in lightly-worn stapled pictorial wraps. Cover story Mikhail Barishnikov. The numbering of the volumes is illogical in the beginning years up to about 1971. The first notice of volume number began with the first issue as volume 10 number 1. This is likely due to the fact that the magazine in 1968 was a reworking of "Ballroom Dance Magazine" A fine magazine of arts, stage, dance and music that bridged the gap between gay and straight readers in the 1970s-80s. (Inventory #: 243568)
$15.00 add to cart or Buy Direct from Bolerium Books
Share this item