A Practical Cookery Book for Use in Day and Evening Schools 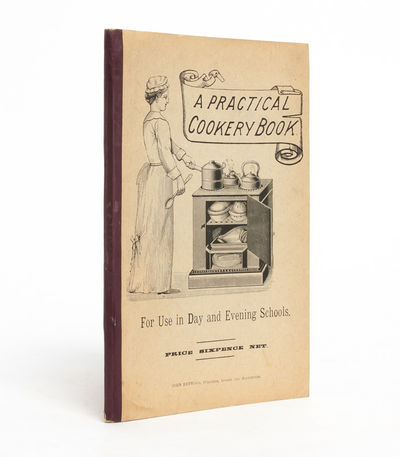 by [Cookery] [Education]
London and Manchester: John Haywood, 1903. First edition. Near Fine. Original pictorial boards with cloth to spine. 76 pages. Faint toning to edges of covers but surprisingly clean overall. Early ownership signature of "Sarah Askworth...1906" to the verso of the front cover and overlaid with tape. Lightly toned throughout, but otherwise unmarked without the signs of kitchen use common in such books. Scarce in trade, OCLC reports no copies of the present work at institutions.

"Around the year 1900 there was a concern about the physical state of the people of Britain. Even though there had been tremendous efforts in the late 19th century to provide better public health, housing, and education, many children were still no more healthy than they had been back in the 1840s. The new Liberal government elected in 1906 passed various measures to try to deal with this problem....and they gave permission for schools to offer meals to their pupils" (National Archives). Efforts to consider the link between education and nutrition had begun in the lead-up to the laws, however; and the present work is a scarce surviving example of such a cookery. Its compilers note in the preface "This collection of Recipes has been prepared specially for Day and Evening Schools. The instructions of the Education Department...have been embodied." Given the book's brevity, it contains a multitude of basic, nutritious and locally accessible foods that can be combined for a variety of different meals -- always with an eye to giving growing students the fuel they need to grow and thrive in their schooldays. There is even included a selection of recipes designed for the sickroom, when students are ill and need extra care for their health. A research-rich compendium. Near Fine. (Inventory #: 3158)
$1,300.00 add to cart or Buy Direct from
Whitmore Rare Books
Share this item