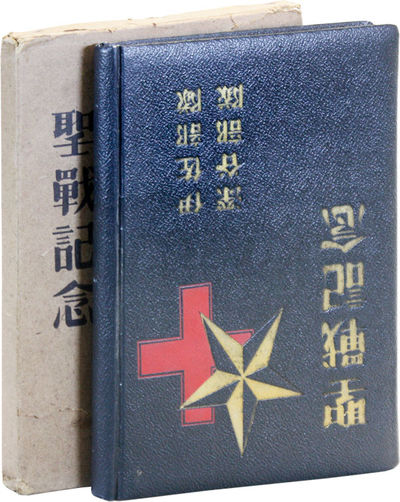 by [Imperial Japanese Army Medical Corps; Nishimura Company; Taisho Photo Factory]
Shanghai: Nishimura Company, 1939. Edition not stated. Quarto (26.5cm); black simulated leather, stamped in red and gilt, in brown paper slipcover; unpaginated photo-illustrated plates w/ rice paper overlays. Wear, minor scuffs and soiling to boards; toning and foxing intermittent throughout text (especially on overlays); some overlays creased or torn. Slipcover worn and chapped, with abrasions and two large (one repaired) tears across front panel. Photo-illustrated pastedowns and endpapers. Very Good in Good slipcover. All text in Japanese (with some obsolete/antiquated kana/kanji), oriented right to left. This is a privately-issued, commemorative, yearbook-type photo album (shashin-cho) published on behalf of the Imperial Japanese Army medical forces during the Second Sino-Japanese War (1937-1945). Specifically it was produced for those who served under military physician captains/commanding officers Nobuo Isa and Tetsuo Fukaya, who were stationed in or near Shanghai at the time.

By July 1939, the Imperial Japanese Army was beginning to feel the impact of its own mounting casualties and costs; the Chinese Red Army would launch a major offensive later that November. While the Japanese occupation of Shanghai was notably brutal, there is little evidence of violence in this album. However, some photographs do depict the aftermath of battle, with ruined buildings and soldiers being treated for injuries. Other subjects are mundane in nature: Staff and group portraits, hospitals and other facilities, physicians at work, company events, and ceremonies. Also includes photographs of Shanghai and a fold-out map of the Hangzhou Bay area. Apparently not cataloged in OCLC or available commercially as of November 2019. (Inventory #: 46634)
$450.00 add to cart or Buy Direct from
Lorne Bair Rare Books
Share this item

All items are offered subject to prior sale. Orders must be prepaid, though billing may be arranged for institutions and customers with established credit. Payment may be made by Check, Money Order, Paypal or by valid credit card (Visa, MasterCard, American Express or Discover). Any item may be returned within 10 days of receipt for full refund. Signed and manuscript items carry an unlimited guarantee of authenticity.
More from this seller
View all from this seller>