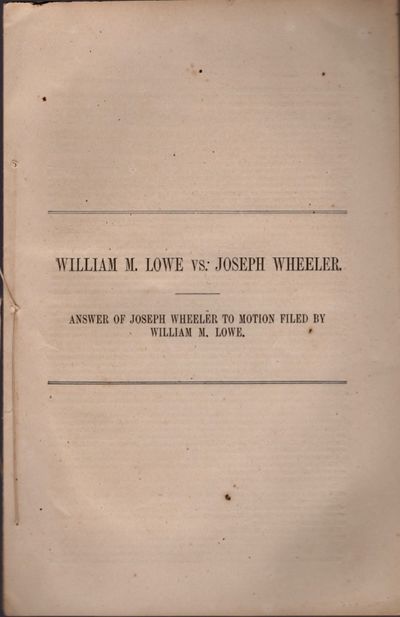 Joseph "Fighting Joe" Wheeler (September 10, 1836 - January 25, 1906) was an American military commander and politician. He is known for having served both as a cavalry general in the Confederate States Army in the 1860s during the American Civil War, and then as a general in the United States Army during both the Spanish-American War and Philippine-American War near the turn of the twentieth century. For much of the Civil War he served as the senior cavalry general in the Army of Tennessee and fought in most of its battles in the Western Theater. Between the Civil War and the Spanish-American War, Wheeler served multiple terms as a United States Representative from the state of Alabama as a Democrat.

William Manning Lowe (June 12, 1842 - October 12, 1882) was an American politician who served the state of Alabama in the U.S. House of Representatives between 1879 and 1881 and in 1882. He was born on June 12, 1842 in Huntsville, Alabama. He attended the Wesleyan University at Florence, Alabama and the University of Virginia. During the Civil War, he served in the Confederate Army as a private, lieutenant, captain, and lieutenant colonel. He studied law, was admitted to the bar, and practiced in Huntsville. He was solicitor of the fifth judicial circuit between 1865 and 1867. In 1870 he was elected to the Alabama House of Representatives, and was a delegate to the Alabama constitutional convention of 1875.

Lowe was elected in 1878 as a Greenback to the U.S. House of Representatives, but in initial results was defeated for reelection by Joseph Wheeler in 1880, 601 votes for Lowe having been declared illegal by election judges. In a highly contentious recount that lasted over a year, Lowe successfully contested Wheeler's election and assumed the office on June 3, 1882. Lowe, however, only served four months, and died of tuberculosis at his home in Huntsville on October 12, 1882. He was buried in Maple Hill Cemetery in Huntsville. Wheeler won a special election and served the remaining weeks of the term.[1]. (Inventory #: 17903)
$125.00 add to cart or Buy Direct from Americana Books
Share this item

Delacorte Press , 1973
(click for more details about Breakfast of Champions)

History of the United Netherlands: From The Death of William The Silent to the Twelve Years' Truce 1609. In Four Volumes

New York : Harper and Brothers , 1872
(click for more details about History of the United Netherlands: From The Death of William The Silent to the Twelve Years' Truce 1609. In Four Volumes)
View all from this seller>