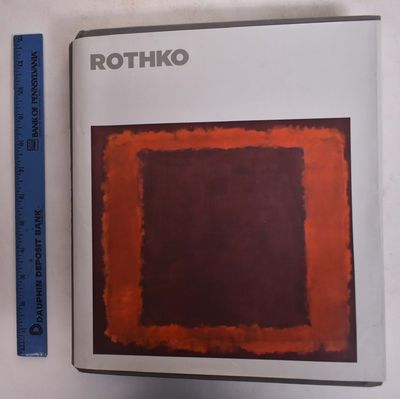 by Rothko, Mark; Borchardt-Hume, Achim; Fer, Briony
London/New York: Tate Pub/ Harry N. Abrams, 2008. Hardcover. VG- (bj is taped to inside front cover, general wear to dj and block edges, library label behind title page). Gray boards with illustrated dj, 256 pp, profusely illustrated in color illustrations. Published on the occasion of the exhibition held at the Tate Modern, London, 26 September 2008-1 February 2009 and the Kawamura Memorial Museum of Art, Sakura, 21 February-14 June 2009. A leading figure in the Abstract Expressionist movement, Mark Rothko (1903-1970) is widely seen as one of the greatest painters of the 20th century. His paintings are famous for the intense, emotional responses they elicit from viewers. Shortly before his death, Rothko donated nine large-scale works to Tate on the condition that they would always hang together in their own space, separate from the work of other artists. This is how the Rothko Room, one of the highlights of Tate's collection, was born. These paintings form part of a larger series known as The Seagram Murals, which were originally intended for the Four Seasons restaurant in New York, a commission from which Rothko famously withdrew. Now, in this landmark reassessment, The Seagram Murals are reunited and cast in a new light by leading international critics including Briony Fer, David Anfam, and Morgan Thomas. With revealing new research, this groundbreaking book challenges the mythology surrounding Rothko and his work. Includes bibliographical references (pages 241-248) and index. (Inventory #: 173654)
$115.00 add to cart or Buy Direct from Mullen Books
Share this item