POSTSCRIPT TO THE PENNSYLVANIA PACKET. NO. 175. [caption title] 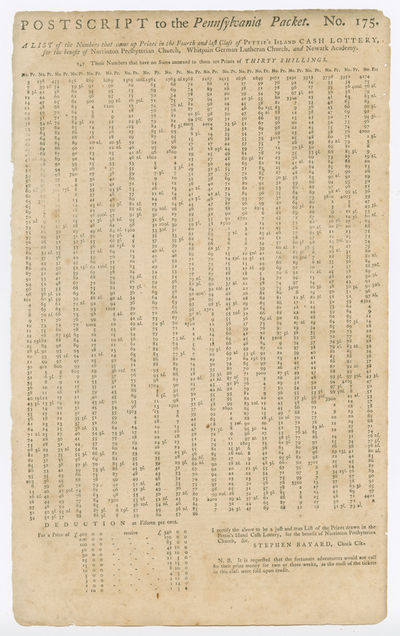 by [Dunlap, John]: [Pennsylvania Packet]
[Philadelphia, 1775. Broadsheet, approximately 16 1/4 x 10 inches. Edges slightly chipped, a few small binding holes not affecting text. Tanned, light foxing. Good. Supplement to the Philadelphia newspaper PENNSYLVANIA PACKET, published by John Dunlap in various guises until 1800. At this time, the periodical was printed weekly, and often carried important first public printings of revolutionary and early federal news and government documents. After the end of the Revolution, it went on to become the nation's first successful daily paper. This issue contains a copy of a speech by Lord Belhaven before Parliament on the union of England and Scotland and decrying English animosities toward the Scots, as well as resolutions from the Committee of York County, Pa., in response to those of the Continental Congress. (Inventory #: WRCAM51561)
$375.00 add to cart or Buy Direct from
William Reese Co. - Americana
Share this item

HISTORY OF THE INDIAN TRIBES OF NORTH AMERICA

Cheyenne, W.T. : S. Allan Bristol, Public Printer, Tribune Office , 1870
(click for more details about GENERAL LAWS, MEMORIALS AND RESOLUTIONS OF THE TERRITORY OF WYOMING, PASSED AT THE FIRST SESSION OF THE LEGISLATIVE ASSEMBLY, CONVENED AT CHEYENNE, OCTOBER 12th, 1869...)
View all from this seller>