POSTSCRIPT TO THE PENNSYLVANIA PACKET. NO. 160. [caption title] 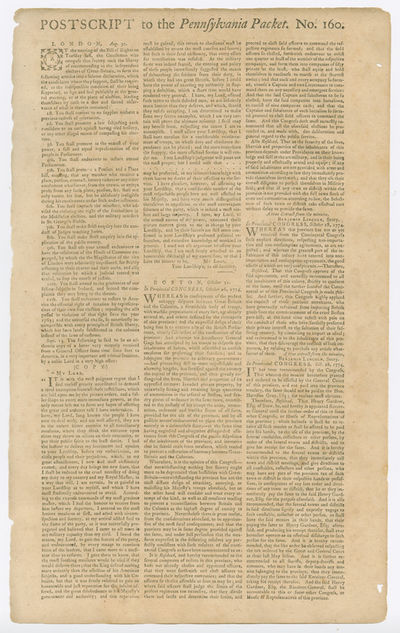 This issue contains a letter from an anonymous English officer reporting on his attempted negotiation with American patriots, relating his demand that their "return to obedience must be established by means the most coersive and severe; but such is their fatal obstinancy that every effort for conciliation was refuted." It also contains resolutions of the Massachusetts provincial congress from late October, 1774, which take up issues such as non-importation and non- consumption of English goods. (Inventory #: WRCAM51557)
$450.00 add to cart or Buy Direct from
William Reese Co. - Americana
Share this item

London 1692
(click for more details about AN ACT DECLARING THE RIGHTS AND LIBERTIES OF THE SUBJECT, AND SETTLING THE SUCCESSION OF THE CROWN. [bound in:] [SAMMELBAND OF EIGHTY PARLIAMENTARY ACTS])
View all from this seller>