INVITATION TO THE 5TH ANNUAL RECEPTION OF THE JOHN F. LITTLE CAMP, NO. 195, SONS OF VETERANS, TO BE HELD ON FEBRUARY 22, 1892, AT THE OPERA HOUSE IN WAYLAND, NEW YORK, WITH PROF. CLARK'S ORCHESTRA APPEARING, SUPPER TO BE HELD AT THE WAYLAND HOUSE 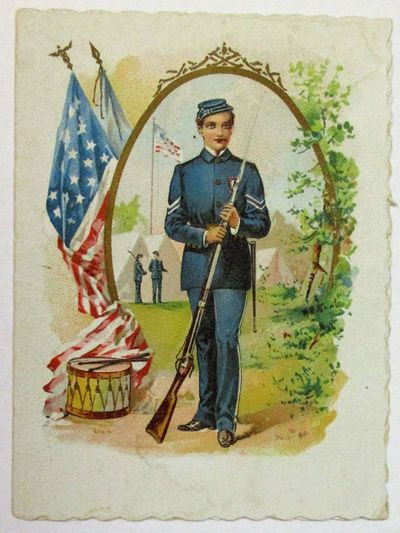 by [Sons of Veterans, U.S.A.]
[Wayland, NY?, 1892. Small, 3-5/8" x 5". [4] pp, folded. An attractively illustrated and printed Invitation. Front of invitation is a full color illustration of a soldier holding a bayonet, soldiers standing near tents in the background, a drum and American flags to the side. The last page is a full color illustration of a Sons of Veterans medal. The wording of the invitation is printed with several elegant fonts, with members of Reception Committee, Floor Committee, and Honorary Committee, and location of the reception. Very Good.

Wayland is a little town about 80 miles east of Buffalo and 60 miles south of Rochester. The Sons of Veterans of the United States of America was founded by August Plummer Davis in Pittsburgh in 1881. It was formed to preserve the work of the Grand Army of the Republic, a fraternal organization of Union Civil War veterans. There had been several independent Sons of Veterans groups in states such as Pennsylvania, Missouri and New York, but they all eventually became part of the Sons of Veterans, U.S.A. The name was later changed to the Sons of Union Veterans of the Civil War in 1925.
Hon. John F. Little [1839-1913] of Bath, New York, after whom this camp was named, was a private in the 161st New York Infantry, participating in the Gult and Red River Campaigns, and the siege of Mobile. He received the rank of Captain after his service at Mobile, and was discharged after three years as Brevet Major. Little was a prominent attorney for many years. He was also an Assemblyman from Steuben County, Supervisor of the town of Bath, Surrogate and Acting County Judge, and a trustee of the New York State Soldiers' Home. ["Captain Little Has Succumbed", ELMIRA STAR GAZETTE, Tuesday, May 13, 1913, p.13.]. (Inventory #: 36274)
$250.00 add to cart or Buy Direct from
David M. Lesser, Fine Antiquarian
Share this item
David M. Lesser, Fine Antiquarian Books LLC
Offered by