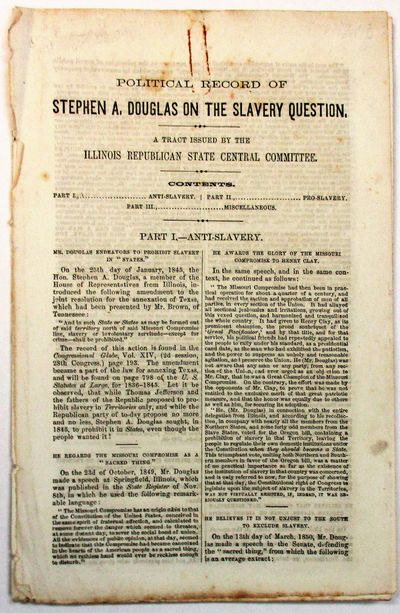 This Illinois campaign document is probably the first of three printings, each with similar but not identical material. Each attacks Douglas for hypocrisy on the question of Congressional power to control slavery in the Territories. Each paints him as an extreme Southern Rights partisan, supporting the Dred Scott Decision and scuttling the Missouri Compromise.
In his early public career, Douglas had extolled the immutable nature of the 1820 Missouri Compromise, and insisted that Congress had full power over the Territories. But in 1854, leading the Kansas-Nebraska Act forces and advocating Popular Sovereignty, he changed horses: only a Territory's inhabitants could decide whether to bar slavery within its borders. His attempt to reconcile the Dred Scott Decision with Popular Sovereignty, and his unconcern with slavery as a social and moral question, are mocked and scorned.
FIRST EDITION. LCP 8794. Sabin 20696n. Not in Eberstadt, Decker, Miles, Ante-Fire Imprints. (Inventory #: 36243)
$650.00 add to cart or Buy Direct from
David M. Lesser, Fine Antiquarian
Share this item
David M. Lesser, Fine Antiquarian Books LLC
Offered by