CLARK COUNTY DEMOCRATIC MEETING | AT A RESPECTABLE MEETING OF THE DEMOCRACY OF CLARK COUNTY MET AT WATERLOO ON THE 8TH DAY OF JUNE 1840. COL. ROBERT P. MITCHELL WAS CALLED TO THE CHAIR, AND JOHN W. LUKE APPOINTED SECRETARY WHEN THE FOLLOWING PREAMBLE AND RESOLUTIONS WERE ACCEPTED. "WHEREAS MAJ. WM. MCDANIEL, THE DEMOCRATIC CANDIDATE FOR THE STATE SENATE FROM THIS DISTRICT, AND DOCT. ABRAHAM WAYLAND FOR THE HOUSE OF REPRESENTATIVES FROM THIS COUNTY BEING BEFORE THE PEOPLE. ... RESOLVED THAT WE DO HIGHLY APPROVE OF THE ENLIGHTENED & PATRIOTIC ADMINISTRATION OF MARTIN VAN BUREN OUR PRESENT PRESIDENT... 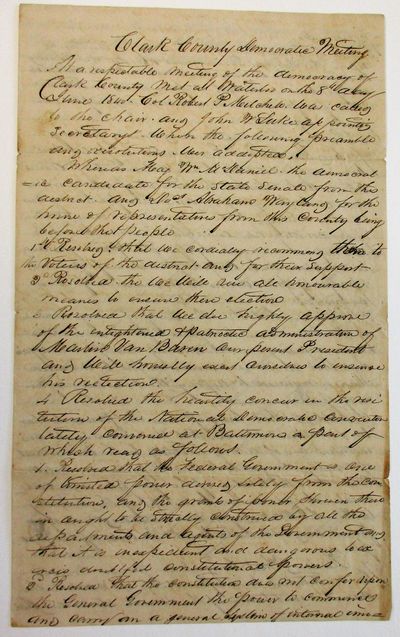 Clark County is located in farthest northeastern Missouri, along the Des Moines and Mississippi Rivers, bordering Iowa to the north and Illinois to the east. The County had been created in 1836, and named after William Clark, of Lewis & Clark fame and territorial governor from 1813-1820. The County's Democratic resolutions, which "highly approve of the enlightened & patriotic administration of Martin Van Buren our present President," express orthodox Democratic doctrine in seeking to ensure his reelection.
"The Federal Government is one of limited power derived solely from the constitution, and the grants of power shewn therein ought to be strictly construed by all the departments and agents of the Government... [T]he Constitution does not confer upon the General Government the power to commence and carry on a general system of internal improvements," "to charter a National Bank," or to "interfere with or control the domestic institution of the several states and that such States are the sole and proper judges of everything appertaining to their own affairs not prohibited by the Constitution; that all efforts of the abolitionists or others made to induce Congress to interfere with the question of Slavery are calculated to lead to the most alarming & dangerous consequences, and that all such efforts have an inevitable tendency to diminish the happiness of the people & endanger the stability & permanency of the Union." The document ends at the bottom of page [3], with a resolve to appoint "the following persons" as a committee of vigilance, but those names are unlisted, evidently to be named later. The final page [4] is blank
Col. Robert P. Mitchell, a Clark County Commissioner, superivised construction of a bridge across Fox River. He was a member of a committee [with Abraham Wayland and William McDaniel] which dealt with land disputes between the northwest boundary of Clark County and the Territory of Iowa.
Major William McDaniel [1801-1866], a Democratic member of the Missouri State Senate from 1838-1840, became a Congressman from Missouri and was a member of the Missouri Volunteers during the Seminole War. John W. Luke [1815-1895] was a postmaster in Waterloo from 1837-1841. Dr. Abraham Wayland [1792-1875] was a physician and served as a surgeon in the United States Army during the War of 1812. (Inventory #: 36229)
$750.00 add to cart or Buy Direct from
David M. Lesser, Fine Antiquarian
Share this item
David M. Lesser, Fine Antiquarian Books LLC
Offered by