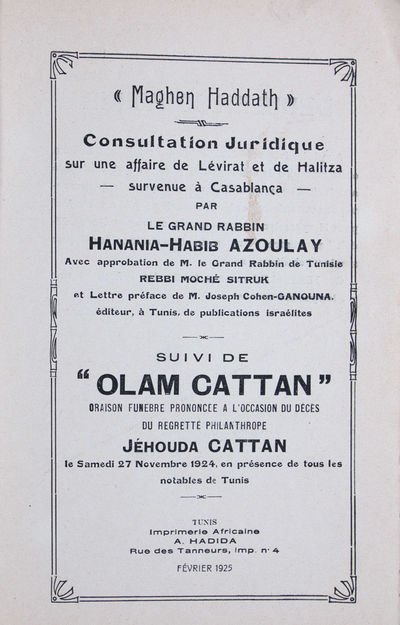 by Azoulay, Hanania-Habib; Elihu Cattan; Joseph Cohen-Ganouna (preface by); Moshe Sitruk (approbation by)
Djerba/Tunis: David Aydan (David Idan)/ Imprimerie Africaine A. Hadida, 1925. First edition. Hardcover. fair to vg. Octavo. 59pp. 11 double-sided leaves, 16pp. Half tan cloth over red mottled paper boards. Includes both Hebrew and French title pages on either end of the book block, which has both Hebrew (left to right) and Arabic numeral pagination (right to left). Indecipherable inscription in ink on the front free endpaper. The publication includes two separate works. The first is an analysis of and guide to the laws of halizah (Chalitzah) pertaining to the Jewish laws of levirate marriage (know as yibbum), written by prominent Casablanca Rabbi Hanania-Habib Azoulay (or Azulai/ Azulay). The second work is titled "Olam Cattan" (a play on the phrase "small world"), and is the transcript of the Elihu Cattan's memorial speech delivered on the occasion of the death of his father, prominent philanthropist and member of the Tunisian Jewish community Yehuda Cattan. Included is an approbation by Chief Rabbi of Tunisia, Moshe Sitruk (1846-1928). The final 16 pages on the other side of the book block contain an abridged translation of Magen Ha-Dat, as well as the preface and the approbation, in French. Hebrew text in Rashi script, with French. Binding with some rubbing and fraying to extremities. Scratches and abrasions to the covers. A large chip on one of the covers shows the brown cardboard under the paper. Binding reinforced at the gutter of the interior front cover with japan tissue. Binding in fair, interior in very good condition overall. Quite scarce. Protected by modern mylar. David Idan (1873-1955) was a Rabbi, writer and printer, of the prominent Idan family of Tunisian Jews. He served as President of the Djerba Jewish community, and founded the first Hebrew printing press there, in 1912. Hebrew title:ספר מגן הדת. חוברת ראשונה. ונלוה אליו קונטרס עולם קטן אשר הקדש לזכרון יהודה הקטן ע״י בנו אליהו הקטן נדפס ב ג'רבה, תרפ"ה Sefer Magen Hadat. (Inventory #: 46275)
$450.00 add to cart or Buy Direct from
Eric Chaim Kline Bookseller
Share this item