Narrative of a Ten Year's Residence at Tripoli in Africa: From the Original Correspondence in the Possession of the Family of the Late Richard Tully, Esq. The British Consul 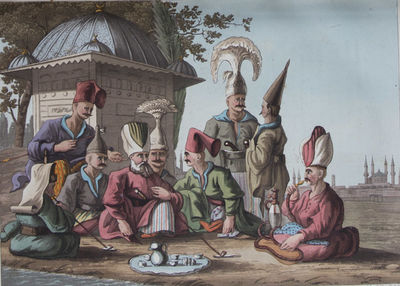 London: Printed for Henry Colburn, 1816. First edition. Hardcover. vg. Quarto. xiii, (2) 370pp., 5 aquatints, 1 folding map. Bound in half calf over decorative paper-covered boards. Marbled edges. Color frontispiece. Two plates are signed engraved by R. Havell & Son. Comprising authentic memoirs and anecdotes of the reigning Bashaw, his family, and other persons of distinction; also an account of the domestic manners of the Moors, Arabs, and Turks. Illustrated with five aquatints, including frontispiece, and one folding map. Attributed to the sister of the British Consul (1783-1793) Richard Tully. "The volume will be found an object of particular curiosity, from the lively and artless manner in which it lays open the interior of the Court of the Bashaw of Tripoli. It contains, we believe, the only exact account which has ever been made publicly known of the private manners and conduct of this African Despot, and details such scenes and events, such sketches of human weakness and vice, the effects of ambition, avarice, envy, intrigue, as will scarcely appear credible in the estimation of a European." (Preface). Contains appendix and index at rear. Binding with light wear along edges. Some foxing of map, engravings only o margins. Binding and interior in overall very good condition. (Inventory #: 46221)
$1,500.00 add to cart or Buy Direct from
Eric Chaim Kline Bookseller
Share this item