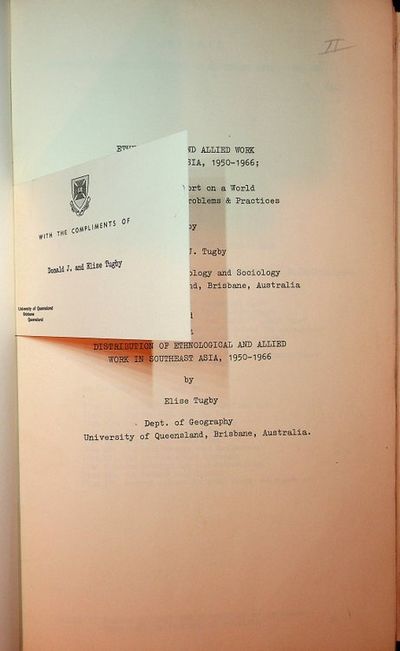 by Tugby, Donald J (paper one); Tugby, Elise (paper two)
[ Brisbane, Australia ]: [ University of Queensland ], 1967. First Edition. Cloth. Near Fine. First Edition. [2], ii, [1]-89 leaves. Errata sheet laid in. Compliments of the authors card tipped in. Reproduced typescript (xerox?), 8 x 13 inches, printed on recto only. The whole bound in brown buckram gilt. Previous owner name "Harold C Conklin" stamped on front flyleaf. '"II" penciled at head of title page (copy 2?). Several folding plates with old cellotape holding two leaves together (as produced?). Bound in at rear is a map of locations, made using a different reproduction process. Cloth. The first paper by Dr. Donald J. Tugby (69 leaves): "The aims of this survey are to establish where fieldwork has been done in Southeast Asia in the period 1950-1966, what kinds of problems have been tackled, the circumstances under which fieldwork has been done, and the technical means employed in the field. It is hoped to outline the 'problemstellung' and fieldwork style of workers from different partss of the world and thereby highlight in what way work traditions limit the advancement of knowledge. It is hoped to reveal unsaturated field areas and untackled problems, and thereby provide a basis for the planning of future research." Donald J. Tugby was with the Dept. of Anthropology and Sociology, University of Queensland.

The second paper (leaves 70-89): "In this paper I shall first describe the distribution of ethnological field locations in Southeast Asia, second examine the pattern in terms of the reasons given by fieldworkers for the choice of their field areas, third, discuss briefly the distribution of linguistic and archaeological field locations, and finally try to account for the neglect of potential field areas." Elise Tugby was with the Dept. of Geography, University of Queensland.

The Tubgy's authored a number of papers together. Harold "Hal" Colyer Conklin (April 27, 1926 - February 18, 2016) was an American anthropologist who conducted extensive ethnoecological and linguistic field research in Southeast Asia (particularly the Philippines) and was a pioneer of ethnoscience, documenting indigenous ways of understanding and knowing the world. (wiki). (Inventory #: 27561)
$138.00 add to cart or Buy Direct from Kuenzig Books
Share this item