On The Life and Services of William Henry Harrison, Late President of the United States: An Eulogium, Pronouncing Before the Citizens of Eastport, Maine, By Dr. Leonard McPhail, U.S.A. April 15th, 1841 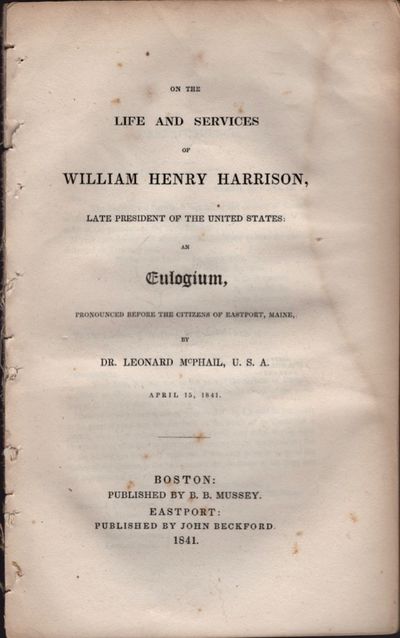 by McPhail, Dr. Leonard
Boston and Eastport: Boston: B. B. Mussey; Eastport: John Beckford, 1841. First Edition. Wraps. Good. Disbound wraps. 28 pages. Light toning and creasing to the paper. A few of the leaves are starting to detach. From wikipedia: William Henry Harrison (February 9, 1773 - April 4, 1841) was an American military officer and politician who served as the ninth president of the United States in 1841. He died of typhoid, pneumonia or paratyphoid fever 31 days into his term (the shortest tenure), becoming the first president to die in office. His death sparked a brief constitutional crisis regarding succession to the presidency, because the Constitution was unclear as to whether Vice President John Tyler should assume the office of president or merely execute the duties of the vacant office. Tyler claimed a constitutional mandate to become the new president and took the presidential oath of office, setting an important precedent for an orderly transfer of the presidency and its full powers when the previous president fails to complete the elected term.[1]. (Inventory #: 17977)
$75.00 add to cart or Buy Direct from Americana Books
Share this item

Journal of the Senate At the First Session of the Thirteenth General Assembly of the State of Tennessee. Begun and Held at Murfreesborough, On Monday The Twentieth Day of September, One Thousand Eight Hundred and Nineteen

by [State of Tennessee]

Murfreesborough : C. A. & A. C. Sudlett, Printers to the State , 1819
(click for more details about Journal of the Senate At the First Session of the Thirteenth General Assembly of the State of Tennessee. Begun and Held at Murfreesborough, On Monday The Twentieth Day of September, One Thousand Eight Hundred and Nineteen)