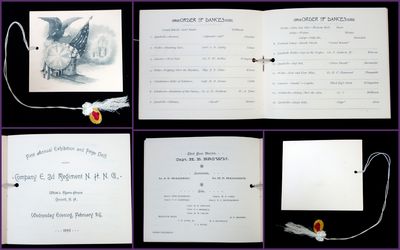 Concord, NH: E.A. Wright, Phila (engraver), February 24, 1892. A dance card for Company E, 3d Regiment of the New Hampshire National Guard's (NHNG) exhibition and prize drill which took place at the White's Opera House in Concord, NH in 1892. The Order of Dance lists the fourteen (14) dances performed that night, such as "Lanciers - West End" and "Waltz - Ever and Ever Mine". The last page of the program lists the Chief Floor Director and his Assistants. The front cover is printed on silk with an engraving of an American Bald Eagle perched on a shield, with an American Flag, drum and rifle surrounding it. Clouds make up the background of the image, with a break in them showing several couples waltzing in the distance. This engraving was done by E. A. Wright from Philadelphia, PA. The string used to bind the program has a tassel at the end with red and gold accents. 4 pg. Pictorial tan wrappers. String binding. Measures 5 1/4" x 4 3/4" (Inventory #: 29016623)
$165.00 add to cart or Buy Direct from Eclectibles
Share this item