Joan and Nan's Book Of Cho and Patricia, Hand-drawn Anthropomorphic Drawings, a collection of picture stories about a pig and a bird 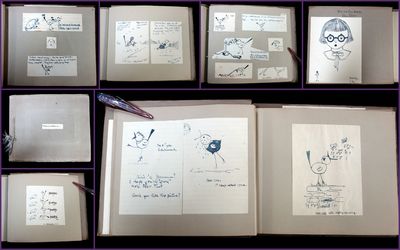 1924-1925. A album featuring a series of drawings depicting the characters Cho and Patricia, a song bird and pig respectively. A collection of series of pictures telling the story of their unusual friendship. They include Cho going to church; a series of misadventures, building a brick wall, moving to a new flat, Pat trying to sing, Waiting for results, Spring 1924; featuring Pat leaving in her new spring bonnet because of Cho's continuous singing followed another series of Cho's misadventures, Pat and Cho playing tennis and concluding with a letter applied to the album - A "Sonit" sent from Cho to Pat about a "buteous" pig with intentional phonetic misspellings through out; truly charming.Each page features a small drawing, mostly done in black ink, featuring one if not both of the characters. Cho is a small bird who loves to sing, and is often seen lamenting when the weather is bad. Patricia, the pig, appears to follow Cho around, taking care of the bird and worrying that Cho is exhausting herself with all that singing. Sometimes, in addition to the drawings, there is written commentary with the images. On the inside covers (both front and back) there are two large drawings of a young girl wearing glasses. Additionally the title of the album is inscribed on the inside front cover: "Joan and Nan's Book of Cho & Patricia". The drawings are done on small to medium pieces of paper, sometimes lined, that have been pasted on to the album pages. A few of the inserts have been stapled onto the album pages. Most are either undated, or dated to 1924-1925.18 leaves, with predominately blank reverse. String binding. Measures 10" x 8 1/2". (Inventory #: 29008878)
$550.00 add to cart or Buy Direct from Eclectibles
Share this item