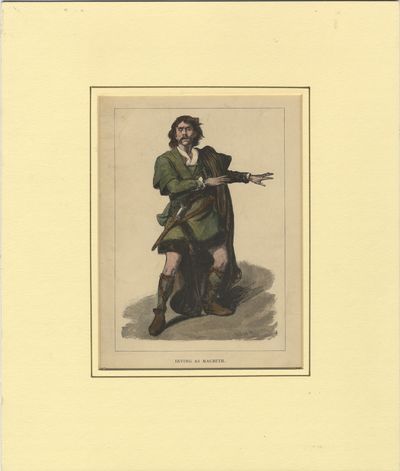 by IRVING, Henry 1838-1905
1875. Image size 168 x 119 mm, sheet size 258 x 180 mm. On wove paper. Full length, standing, in tunic with sword and cloak, arms outstretched, within ruled border. Signed "M Klinkicht" and "V.W. Bromley" in the plate, with "Irving as Macbeth" printed below image. From the collection of the distinguished American mezzo-soprano Marilyn Horne (b. 1934). Light uniform browning; edges slightly worn, not affecting image. Hall II, p. 291, 199. Sir Henry Irving was the most famous stage actor of his generation, and the first actor to gain knighthood. He spent most of his career at the London Lyceum Theatre, where he managed every aspect of his performances. Shakespearean leads were his hallmark, but he portrayed a wide variety of characters in a range of plays. Irving's persona figured prominently in his acting, sometimes dividing critics on his style, but his unique success and legacy cannot be overstated. "Horne had a voice of extraordinary range, rich and tangy in timbre, with a stentorian chest register and an exciting top... In concert she once achieved the feat of singing in a single programme Rossini arias and Brünnhilde's Immolation Scene, proof of her exceptional versatility. Throughout her lengthy career she was an admired recitalist, singing lieder, mélodies, Spanish and American songs with equal aplomb." Alan Blyth in Grove Music Online. (Inventory #: 31859)
$66.00 add to cart or Buy Direct from
J. & J. Lubrano Music Antiquarians
Share this item