Address Delivered Before the Literary Societies of the University of Virginia, on the 28th June, 1855 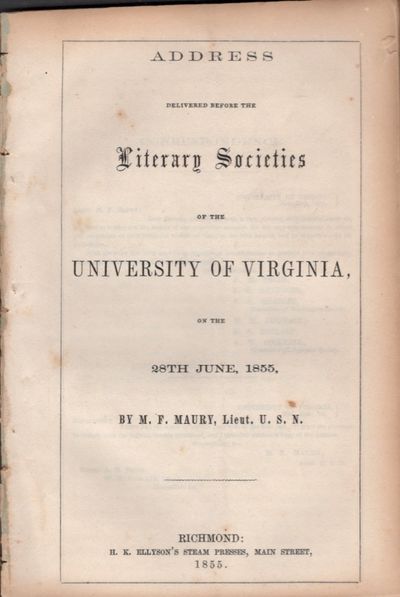 by Maury, M. F. (Lieut. U.S.N.)
Richmond: H. K. Ellyson's Steam Press, 1855. First Edition. Wraps. Very good. Disbound wraps. Approx. 8" x 5.5". 24 pages. Light toning to the edges. Matthew Fontaine Maury extols the virtues of Virginia's wealth and resources in this speech and hints of struggles between States to come - "Virginia yields to no state under the sun for the virtue and patriotism of her people. She has done more for this Union than any other member in it; and the time may come-which God forbid!-when her powers to bring into play patriotic and conservative influences will be tried to the utmost." 17 copies held in OCLC. From wikipedia: Matthew Fontaine Maury (January 14, 1806 - February 1, 1873) was an American astronomer, United States Navy officer, historian, oceanographer, meteorologist, cartographer, author, geologist, and educator. He was nicknamed "Pathfinder of the Seas" and "Father of Modern Oceanography and Naval Meteorology" and later, "Scientist of the Seas" for his extensive works in his books, especially The Physical Geography of the Sea (1855), the first such extensive and comprehensive book on oceanography to be published. Maury made many important new contributions to charting winds and ocean currents, including ocean lanes for passing ships at sea. (Inventory #: 18189)
$125.00 add to cart or Buy Direct from Americana Books
Share this item

Tel Aviv : Tribes Gallery , 2007
(click for more details about Master Lee Sun Don: The Mind in Freedom)
View all from this seller>