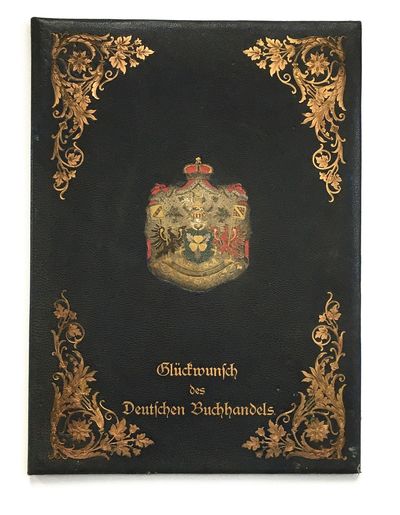 by (BÖRSENVEREIN)
One large text illus. drawing signed "P.K." on second leaf. Four leaves (three printed, the final blank; each 440 x 320 mm.), with elaborate title border on first leaf, all printed in red & black. A remarkable folio portfolio binding (460 x 335 mm.) of blue morocco over wooden boards, upper cover with large elaborate engraved metal devices inlaid in corners & engraved metal coat-of-arms of Bismarck inlaid in center, titled in gilt "Glückwunsch des Deutschen Buchhandels" using inlaid metal letters, inner covers in brown calf with rich blind dentelles, signed "Franz Benstein." Berlin: W. Büxenstein, 1885. The unique printed birthday salute for Bismarck on his 70th birthday, designed, printed, and presented by the German book trade association (Börsenverein Deutscher Buchhändler). It is signed by the publishers Adolf von Kröner, Paul Parey, and others. The drawing is probably done by the painter and illustrator Paul Klette (1854-1895), who belonged to the circle of Max Klinger (see Thieme-B. XX, 487). The elaborate binding by Franz Benstein has inlaid on the upper cover complex large decorative metalwork devices in each corner and, in the center, a large engraved metal panel with the finely engraved coat-of-arms of Bismarck. The Börsenverein was founded in April 1825 in Leipzig, and by the end of that year there were already 235 members. The origins of the association go back to the book brokers' exchange, organized in 1792 to deal with the different currencies then in use in Germany and greater Europe. It allowed booksellers and publishers from all over the continent to simplify purchases and contracts carried out at the Leipzig bookfair. At the beginning, the primary concern of the Börsenverein was to simplify the billing system at the fair. Soon, the association began to represent the entire publishing and bookselling industries, campaigning for the abolition of censorship, standardized copyright regulations, and the introduction of fixed prices in bookshops. A little rubbed and soiled. Corners a bit bumped but fine. (Inventory #: 6887)
$2250.00 add to cart or Buy Direct from
Jonathan A. Hill, Bookseller
Share this item
Jonathan A. Hill, Bookseller, Inc.
Offered by