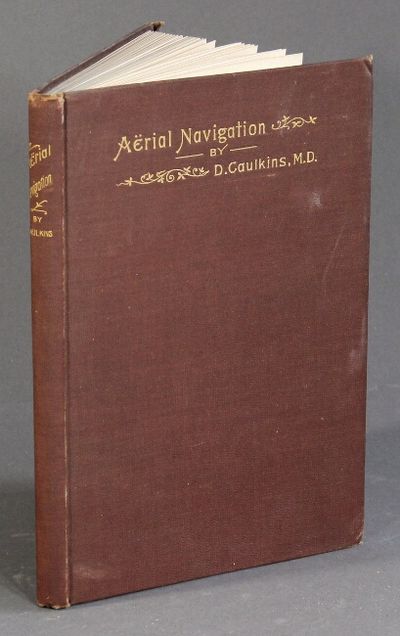 by Caulkins, Daniel, M.D.
Toledo: [privately printed], 1895. 8vo, pp. 90; frontispiece portrait and 7 plates; original brown cloth lettered in gilt on spine and upper cover; near fine. "The author, an obscure 70 year-old Ohio physician, identified himself on the title page as "Discoverer of the Circulation of the Nerves and Inventor of the Electro-Magnetic Circular Power". A 1941 WPA Ohio history which called this book "now exceedingly rare" described Dr. Caulkins' work as ignored and forgotten, especially as he had failed to follow it up, as he had promised, with an 'atlas containing complete plans for flying machines'. Still, his far-sighted writing did 'undoubtedly establish him as one of the prophets of aviation' who correctly foresaw the vast future impact of manned flight - on warfare, exploration, global transportation and communication. Although Caulkins wondered 'who will be the first to cover themselves with glory' by inventing the first flying airship, there is no evidence that the Wright brothers, just 150 miles to the south in Dayton, ever read, let alone seriously studied, this curious book" (Pacific Book Auction Galleries). (Inventory #: 55509)
$402.50 add to cart or Buy Direct from
Rulon-Miller Books
Share this item