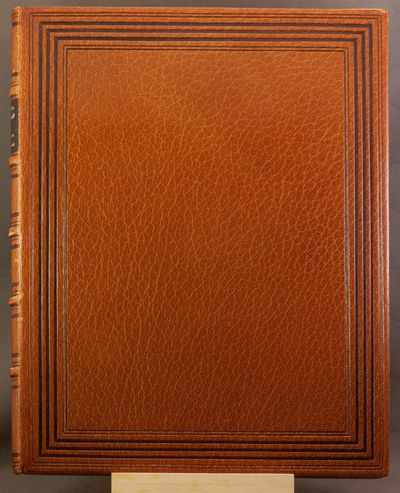 by Perrault, Charles; Léon Gruel, binder.
Paris: Maurice Darantiere, 1948. Very Good/Remboîtage (that is, a newer book bound in an older binding) of an imperfect copy of Charles Perrault's classic tale in a prestige binding dating from the turn of the century. Léon Gruel was the creative half of the firm of Gruel & Engelmann, publishers and deluxe binders. Known for jewel-like tooling, Gruel later favored a plain style based on simple geometric rhythms, such as here. The remboîtage is not signed, but is the work of the one-handed Czech-American binder Ruth Stein. Stein apparently acquired a botched copy from the press run and encased it in the precious binding.. Imperfect text, offered as a binding. 29 cm; 48 of 55 pages, including title page, justification page (in duplicate), series page (#18 of 165), dedication page, frontispiece illustration, and pages 15-55. Illustrated by Hermine David (1886-1970). Text sheets bound in boards fashioned by Léon Gruel (1841-1923), considered one of the greatest book artists of the French Third Republic. Full crushed brown morocco with borders ruled in black on both boards; raised bands; gilt-filleted turn-ins with gold and black inner border, gold moiré doublures and free endleaves. Stamped "ex. libris Albert Dubosc" along lower edge of turn-in. Preserved in slip-case which may or may not be original. Some slight wear to upper joint; minor touch-ups applied to spine. Else fine. (Inventory #: 6179)
$450.00 add to cart Available from
Rodger Friedman Rare Book Studio
Share this item
Rodger Friedman Rare Book Studio
Offered by