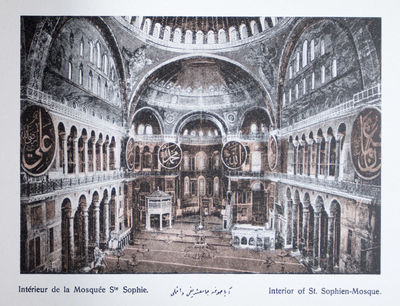 Softcover
by M. J. C. (ed.)
Softcover. g- to vg. Oblong Octavo. 2 leaves, 24 plates. Original brick red string-bound wraps with embossed gilt lettering and illustrations on cover and color lithograph of the Galata bridge mounted into gilt frame of cover. Some Turkish lettering on cover. Half title with decorative black grid and title in Turkish, French and English, followed by index of titles of twenty-four chromolithographs after photographs, here in French and Turkish. The stunning twenty-four color photographs (4 3/4 x 6 1/2"), rendered in chromolithography, depicting landmarks of the Turkish metropolis, e.g. the Mosque of St. Sophie, the Roumeli Hissar, the Kiosque of Sweet Waters of Asia, the Ortakeui-Mosque, the Imperial Palace, the Grand Bazar, the Leander's Tower, the Fountain of the Emperor William, the Ahmedieh Mosque, the Jildiz-Palace, and various scenic views of Constantinople. All captions are in French, Turkish, and English. Wraps with light wear along edges, small chips, and slightly faded. Wraps in overall good-, interior in very good condition. (Inventory #: 46311)
$200.00 add to cart or Buy Direct from
Eric Chaim Kline Bookseller
Share this item