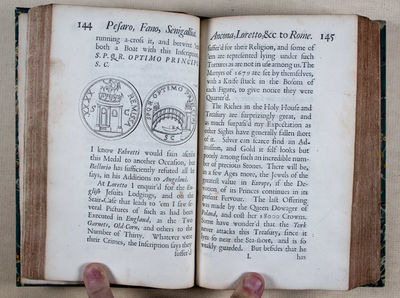 by Addison, Joseph
London: Printed for Jacob Tonson, 1705. First edition. Hardcover. vg. Octavo. (12) 534 (10)pp. Rebound in modern half calf over marbled boards with gilt ruling and lettering on red leather label of spine; raised bands. Speckled edges. Black double frame on title page. Historiated headpiece on dedication page. Handsome first edition of Addison's famous journey through Italy with some in-text illustrations depicting various Italian coins. "After travelling south to Marseilles Addison took ship for Italy on 12 December 1700, but was driven back by a storm. In the end he reached Genoa by land, and then proceeded through Pavia to Milan and then Venice, after which he followed the accustomed route south, choosing to go via San Marino and Loreto as he journeyed briefly to Rome and then on to Naples. He climbed Vesuvius, sailed round Capri, and sailed back up the coast to Rome. Here he passed a more extended sojourn, visiting churches, annotating architecture and antiquities, and undertaking trips out to literary shrines such as Tivoli and Frascati. There were poetic echoes on almost every corner for a man as deeply imbued in the ancient corpus as Addison, and he was to coin the phrase 'classic ground' to express a pervading atmosphere of ageless accomplishment, as the familiar texts sprang unbidden into his mind" (ODNB). Minor wear along edges of binding. Light browning of half-title and light water-staining in lower left corner of last few pages. (Inventory #: 46299)
$675.00 add to cart or Buy Direct from
Eric Chaim Kline Bookseller
Share this item