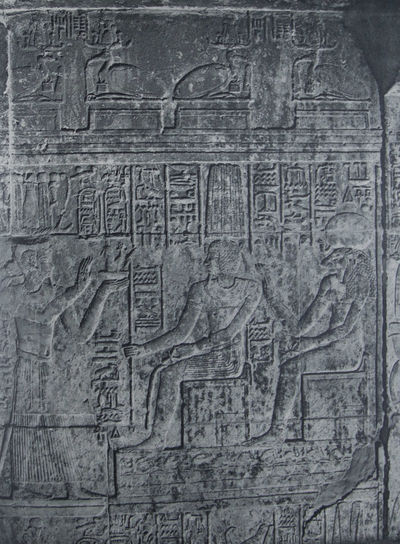 by Roeder, Günther
Le Caire: Imprimerie de l'Institut Français d'Archéologie Orientale, 1930. First edition. Hardcover. vg. Folio (13 3/4 x 10"). [6], viii, 382pp (Text) (Vol. 1), xv, [1], 167 leaves (Plates) (Vol. 2), [8], viii, 104pp (Vol. 3). Modern green cloth library binding, with gold lettering to spines. Title pages in red and black lettering. Günther Roeder's monumental 3-vol. set on the inscriptions of the Nubia Temple of Dakke (Dakka*) is lavishly illustrated with no less than 167 illustrated and photographic plates reproduced in photogravure (Vol. 2). The third volume is dedicated to Greek and Latin inscriptions. Ex-library copy with bookplate on inside of each front cover, pockets at rear, and stamps at top and lower paper edges. Spine of second volume cocked. Text in German. Binding and interior in overall very good condition. *The Greco-Roman Temple of Dakka, dedicated to Thoth, the god of wisdom in the ancient Egyptian pantheon was located in Lower Nubia. The temple was initially a small one-room shrine or chapel, first begun in the 3rd century BC by a Meroitic king named Arqamani (or Ergamenes II) in collaboration with Ptolemy IV who added an antechamber and a gate structure. Ptolemy IX "subsequently enlarged the temple by adding a pronaos with two rows of probably three columns." During the Roman period, the Emperors Augustus and Tiberius further enlarged the structure with "the addition, at the rear, of a second sanctuary as well as inner and outer enclosure walls with a large pylon. The sanctuary contained a granite naos." The Temple of Dakka was transformed into a temple fortress by the Romans and surrounded by a stone wall, 295 yards (270 m) by 485 yards (444 m) long, with an entrance along the Nile. (From Wikipedia). (Inventory #: 46431)
$675.00 add to cart or Buy Direct from
Eric Chaim Kline Bookseller
Share this item