To the Free-Holders of Rowan & Davie Counties [caption title] 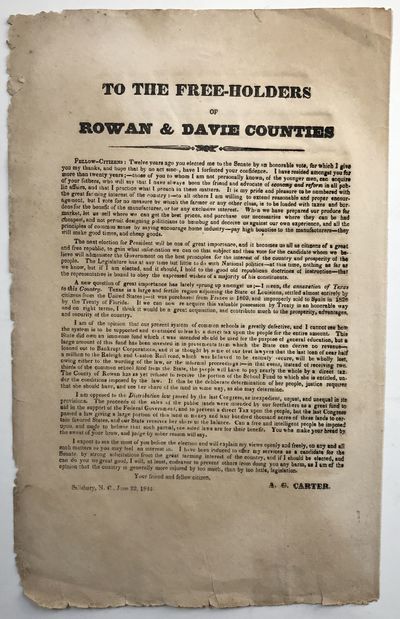 by [Texas]. Carter, A.G.
[Salisbury, N.C., 1844. Very good.. Small broadside, 12.5 x 7.75 inches. Several minor chips at edges. Light, even tanning. A rare campaign broadside for a State Senate candidate in North Carolina, A.G. Carter, which discusses his position on the annexation of Texas. Carter had held his seat representing Rowan and Davie counties for twelve years before this campaign, and although "the Legislature has at any time but little to do with National politics," he states that: "A new question of great importance has lately sprung up amongst us;- I mean, the annexation of Texas in this country. Texas is a large and fertile region adjoining the State of Louisiana, settled almost entirely by citizens from the United States;- it was purchased from France in in 1803, and improperly sold to Spain in 1820 by the Treaty of Florida. If we can now reacquire this valuable possession by Treaty in an honorable way and on right terms, I think it would be a great acquisition, and contribute much to the prosperity, advantages, and security of the country." Carter goes to state that he opposes the Distribution Law, which addressed the ability of Congress to sell public lands and was another hot button issue of the day, as many feared that the resulting revenue would be used to favor certain states over others. A fascinating document of the grip that the Texas annexation question held even on state politics. We locate only four copies, at UNC, Wake Forest, Virginia, and the State Library of North Carolina. Not in Streeter. American Imprints 44-1231. Thornton 1892. (Inventory #: 1153)
$750.00 add to cart Available from
McBride Rare Books
Share this item