Turks Islands; From A Survey Made in 1753, by the Sloops l'Aigle and l'Emeraude by Order of the French Governor of Hispaniola, with improvements from Observations made in 1770 in the Sr Edward Hawke Kings Schooner 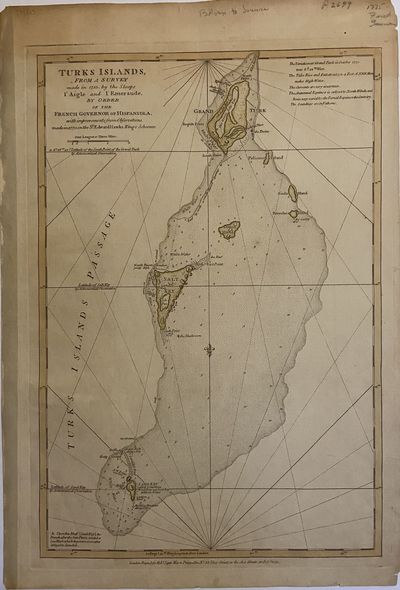 by JEFFERYS, Thomas
London: Robert Sayer, 1775. unbound. Sea Chart. Engraving with original hand coloring. Measures 19 1/4" x 13 1/2". This scarce map of Turks Islands by Thomas Jefferys depicts the Caribbean archipelago. It features Grand Turk, Cotton Cay, Salt Cay, Sand Cay, and notes some topographical features, salt pans, and reefs. Relief shown by hachures; depths by sounding. Chips and toning to margins. Thomas Jefferys (1710-1771) was one of the most important and prolific mapmakers of his era with particular focus on North America. Robert Sayer (1725-1794) was an important English publisher of maps, portraits, and nautical engravings. Partnering with John Bennett around the 1760s, the two published the works of well-known cartographers such as Kitchen, Jefferys, Belling, d'Anville and others. This beautiful, large-scale map is an impressive example of his work. (Inventory #: 294315)
$675.00 add to cart or Buy Direct from
Argosy Book Store
Share this item