The Art of Politicks, In Imitation of Horace's Art of Poetry. 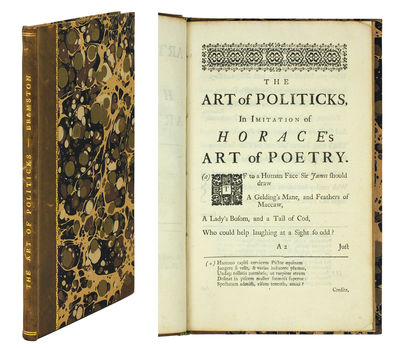 by Bramston, James.
London: Lawton Gilliver... 1729. Sm. slim 8vo, frontispiece, A-F4; [1-3], 4-47, [48]pp. Modern quarter calf, marbled boards, backstrip lettered in gilt. A very good clean copy. § First edition, 3rd issue (Foxon B387, Williams "D" copy). A complicated book of which there seem to be at least 6 variant issues of the first printing. This copy has the two-line rule above the imprint, ads listing 7 titles, and a partial watermark of a horse. It conforms to ESTC T66319. CR Jonson noted: "James Bramston (1694?-1743) was a Sussex clergyman with a reputation for wit and an ability to find favor in high places. This, his first published poem, was many times reprinted and anthologized. The object of the satire is simple enough: to expose the absurdities of contemporary political life, as expressed in Parliament, the press, and the literary world, without favoring any particular party or faction. The poem is full of allusions to contemporary celebrities -- Walpole and Pulteney, Addison and Thomas Tickell, Jacob Tonson and Edmund Curll, and Pope, Swift, and "Johnny Gay." Pope had already described Bramston in his Dunciad (1728) as a clever preacher, and he has praise for this poem in one of his letters. (Inventory #: 123020)
$375.00 add to cart or Buy Direct from
John Windle, Bookseller
Share this item

One Arm and other stories.