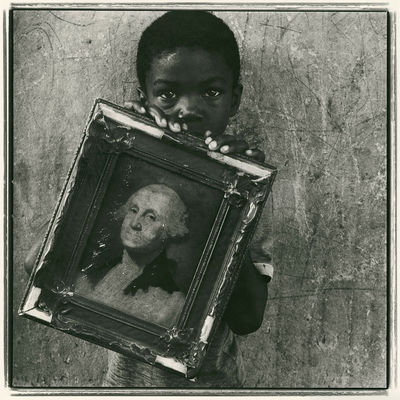 Keith Carter (1948 - Present). Internationally recognized photographer and educator. He holds the endowed Walles Chair of Art at Lamar University, Beaumont, Texas. He is the recipient of two National Endowment for the Arts Regional Survey Grants and the Lange-Taylor Prize from The Center for Documentary Studies at Duke University. In 1998, he received Lamar University's highest teaching honor, the University Professor Award, and he was named the Lamar University Distinguished Lecturer.

His photographs are included in numerous permanent collections, including the Art Institute of Chicago; the San Francisco Museum of Modern Art; the George Eastman House; the Museum of Fine Arts of Houston; and the Wittliff Collection of Southwestern and Mexican Photography at Southwest Texas State University.

"The quirky, the offbeat and the unexpected are Keith Carter's strengths in this show of recent black-and-white photographs, in which deliberate blurs, soft or out-of-focus approaches and other distortions are sometimes used. While no common thread ties his subjects together -- from an elegant sleeping swan whose body suggests a classical vase to the uneventful meeting of a horse and a wolf -- they are united by an uncommonly penetrating sensibility. And sometimes he just gets lucky.

His lens confers significance on such casual encounters as a dog beneath a moon, the spangled pants leg of a mariachi player, a white horse trotting under two ripe oranges dangling from a tree. And then there are more calculated moments: a brooding monkey atop a six-tiered wedding cake, a puppeteer in a park manipulating a miniature Pinocchio, or the nude body, seen from the rear, of a huge, pear-shaped man seated on a bench in close conjunction with a pair of shapely female legs.

A frequent subject is children at play, semi-posed shots in which they wear masks or other facial adornments, as in "Renaissance Mouse." In the unaccustomed context of corroded but baronial stone stairs and columns, a boy in a checked shirt stiffly confronts the camera wearing a Mickey Mouse mask; in "George Washington," a small boy with big eyes gleefully holds up a battered portrait of our Founding Father. It's a show of endearingly human dimension." (Inventory #: 25394)
$4,800.00 add to cart Available from Seth Kaller
Share this item