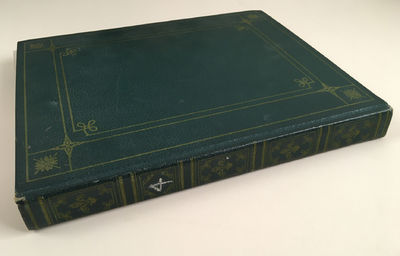 The American Christian Palestine Committee (ACPC) was created in 1946 by merger of the American Palestine Committee (1931-1946) and the Christian Council on Palestine (1942-1946). Its purpose was to educate American Christian leaders about the post-Holocaust need for a Jewish state, to publicize the new states' accomplishments, to fight anti-Semitism, and to support the country's existence. Over 20,000 Christian leaders, mostly Protestants, were members. The ACPC sponsored seminars, published educational materials, created a speaker's bureau, and conducted study tours taking religious leaders and journalists to Israel and adjoining Arab lands.

This scrapbook documents a trip from March 31 - April 28, 1951. Its goals include making a "comprehensive study of Arab-Israel problems," including finding "suggested solutions for the resettlement of these tragic victims of the Arab-Israel War of 1948." The tour visited Israel, Jordan, and Lebanon, and was the first ACPC group to visit to Palestinian refugee camps.

The group met Israeli Prime Minister David Ben-Gurion; Hashemite Kingdom of Jordan Foreign Minister Achmed Tooqan; Rabbi Jaacov Herzog, son of the Chief Rabbi of Jerusalem; and American Ambassador to Israel Monnet Davis, as well as other government and university officials and mayors. Early items in the scrapbook are typed copies of their itinerary, including stops in Beyrouth (Beirut), Jerusalem, Tel Aviv, Haifa, and Nazareth; a list of participants with their affiliations; and memoranda. It also includes airline tickets, postcards, hotel reservations (including the King David Hotel), and ephemera. Of particular interest is a printed pamphlet with basic information about the Knesset that includes Fry's notes of the group's meeting with Ben-Gurion (1886-1973). After about two weeks in the Middle East, Fry also briefly visited Rome, Paris, and London. He used his notes for an article in the Philadelphia Evening Bulletin.

The scrapbook collects printed ephemera that illustrate Israel presented itself, including a large color "tourist guide map" of Tel-Aviv (13½ x 9½ in.), a 24- x 17-inch folding color "motor map" of Israel (laid in), with their route highlighted in red and with tourist information on each city on the verso; and a small program for a production of "Carmen" by the Hebrew National Opera. Other items include a Vocabulary for Visitors to Israel; and the post-return typed or handwritten letters Fry received, including messages of friendship, from other tour attendees.

"In Jerusalem—which means City of Peace—there is much talk of peace. In the Arab countries of Lebanon and Jordan there is more talk of co-operation than of hate. It may be a hopeful index. But no one agrees as to where it will start… if you look carefully, there is the desire for peace down at the grass roots among Arabs living as displaced persons in caves and tents and among Israelis living under an austere program."

"Prime Minister David Ben-Gurion, of Israel, would welcome the good offices of the United States in establishing peace in the Near East. Israel and the Arab states are now operating under an uneasy armistice with frequent border incidents… The shaggy, white-haired leader of the modern miracle that is the State of Israel interrupted conferences in connection with the meeting of the Knesset, Israel's Parliament, now in session, to greet the members of the American Christian Palestine Committee study group, of which the writer is a member. With all the frankness of a long-time friend he talked of Israel's plans and problems and answered questions with a refreshing frankness free of diplomatic double talk."

"In the valley of the Armageddon, the old Biblical plains of Esdraelon, the scene of many ancient victories and disasters of the Jews, the modern Jews won their first victory of the land in the early twenties when the drained the malarial swamps. Today the valley is a Garden of Eden of fragrant orange, citrus and olive groves and garden crops—a delight to the eyes after days of traveling in the eroded, dust-storm swept Arab lands to the east of Israel… In the Hula Lake section, north of the Sea of Galilee and Capernaum, where Christ performed his miracles, the Jews are today performing modern miracles by reclaiming further swamp areas."

"In a cave on Mt. Zion, ancient citadel of Jerusalem, are the ashes of thousands of Jewish martyrs to Nazi intolerance—a symbol of 6,000,000 who so perished. About them are the sacred scrolls desecrated by the Nazis. One of these had been made into a house coat by a Nazi who apparently did not read Hebrew because it bears on its back the warning that the Lord will wreak vengeance upon those who persecute his people… Atop a tower on this hill, which borders no-man's land in the uneasy truce with the Arab kingdom of Jordan, an Israeli soldier keeps vigil above these shrines that appeal for peace and tolerance. The Jews have put the terrible evidence of intolerance underground and are building a new tomorrow. They want to talk of peace in the Near East, the whole refugee problem including the Arabs."

"I want to express appreciation for the cooperative spirit all of you manifested on the Tour. You were really a wonderful crew! Thanks, too, to all of you once again for the lovely Menorah and plate for Hanukkah with which you surprised me during our last evening together in Israel."

"Harrison W. Fry, seasoned newspaperman and religious editor of the Evening Bulletin, did a splendid job in reporting and interpreting the events in Israel as he observed them during his two weeks' tour of the country at the invitation of the American Christian Palestine Committee. His articles that have appeared in the Evening Bulletin during these past few weeks have given the readers of the Bulletin a clear insight into some of the problems concerning the country and the manner in which the Government and the people of Israel are grappling with these problems."

"I did have a chance to hear from my friends that you have given some excellent reports since you returned from the Middle East and that you were as stimulated and thrilled by the trip as was I… I was a bit disappointed not to have your assent to our reiterated invitation to be listed among the speakers for the Club Program Service, the speakers' bureau of the American Christian Palestine Committee, but I presume that compelling reasons determined your decision. Won't you still reconsider? We would look upon your addition to the list of speakers for Club Program Service as a real boon for the ACPC."

"Judge Levinthal called me late yesterday to say that he and some of his friends were thinking of nominating me as a member of a small party of Christian clergymen from all parts of the United States who are being sent, expenses paid to visit Palestine and get first had information of conditions there. Would I accept if the full committee approved. Had I been to Palestine."

"I told him the prospect thrilled me as I had never been to Palestine.... I told him that Fry disassociated form The Bulletin did not mean anything and much as I would like to go on my own I felt I should not unless the matter was cleared through The Bulletin."

Harrison W. Fry (1892-1973) was born in Pottstown, Pennsylvania, and married Laura V. Umstead (1894-1967) in 1918. He entered journalism before World War I with the Public Ledger, and then served as religion and education editor for the Philadelphia Evening Bulletin
for forty-two years. Fry interviewed every president from Theodore Roosevelt to Harry S. Truman. He served as a charter member and later president of the Education Writers Association in 1948-1949 and was a founding member of the Religion Newswriters Association in 1949.

Carl Hermann Voss (1911-1995) was a Congregational minister, who served in Brooklyn; Pittsburgh; Raleigh, North Carolina; and Saratoga Springs, New York. During World War II, he founded and led the Christian Council on Palestine before becoming one of the founding members of the American Christian Palestine Committee.

Louis E. Levinthal (1892-1976) received three degrees from the University of Pennsylvania and was a judge of the Court of Common Pleas for Philadelphia County from 1937 to 1959. He was president of the Zionist Organization of America from 1941 to 1943 and special adviser for Jewish affairs to the postwar European Command in 1947-1948. He served as chairman of the board of governors of Hebrew University in Jerusalem from 1962 to 1968.

Starting in 1951, the group's activities were opposed by the pro-Arab American Friends of the Middle East, later proven to be funded in part by the CIA. The ACPC wound down in the early 1960s when the Israeli embassy and consulates took over the task. (Inventory #: 25321)
$1,500.00 add to cart Available from Seth Kaller
Share this item