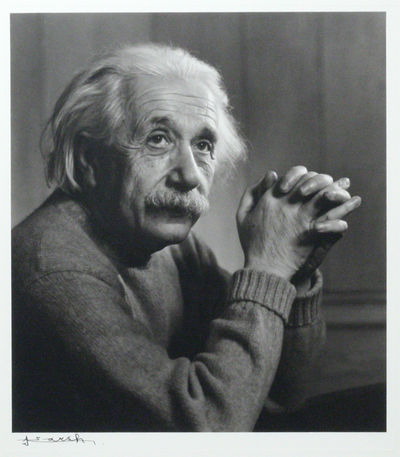 by EINSTEIN, ALBERT; KARSH, YOUSUF
Princeton, NJ: np, 1948. framed. Fine. ONE OF THE MOST CELEBRATED IMAGES OF EINSTEIN, SIGNED BY MASTER PHOTOGRAPHER, YOUSUF KARSH. On February 11, 1948, Yousuf Karsh, perhaps the most accomplished portrait photographer of his generation, visited The Institute for Advanced Study in Princeton to fulfill a dream of his: to photograph Albert Einstein. As he later explained: "Among the tasks that life as a photographer had set me, a portrait of Albert Einstein had always seemed a 'must' - not only because this greatest refugee of our century has been accounted by all the world as the [most] outstanding scientist since Newton, but because his face, in all its rough grandeur, invited and challenged the camera..." (Karsh: Beyond the Camera, David Travis, ed.). "At Princeton's Institute for Advanced Study, I found Einstein a simple, kindly, almost childlike man, too great for any of the postures of eminence. One did not have to understand his science to feel the power of his mind or the force of his personality" (official Karsh website)... "Awed before this unique intellect, I yet ventured to ask Einstein his views on human immortality. He mused for a moment and then replied, 'What I believe of immortality? There are two kinds. The first lives in the imagination of people and is thus an illusion. There is a relative immortality, which may conserve the memory of an individual for some generations. But there is only one true immortality, on a cosmic scale, ant that is the immortality of the cosmos itself. There is no other.' "He spoke of these ultimate mysteries as calmly as he might a student's question about mathematics - with such an air of quiet confidence, indeed, that I found his answer profoundly disturbing to one who held other views. Knowing him to be an accomplished violinist, I turned the conversation, and asked if there were any connection between music and mathematics. 'In art, he said, 'and in the higher ranges of science, there is a feeling of harmony which underlies all endeavour. There is no true greatness in art or science without that sense of harmony. He who lacks it can never be more than a great technician in either field.' "Was he optimistic about the future harmony of mankind itself? He appeared to ponder deeply and remarked in graver tones: 'Optimistic? No. But if mankind fails to find a harmonious solution than there will be disaster on a dimension beyond anyone's imagination.' To what source should we look for the hope of the world's future? 'To ourselves,' said Einstein. He spoke sadly yet serenely, as one who had looked into the universe far past mankind's small affairs. In this humor my camera caught him... the portrait of a man who had traveled beyond hope or despair." (Yousuf Karsh, Regarding Heroes). (Opening quote from: Colin Naylor, ed., Contemporary Photographers.) Silver print. Photo taken Princeton, 1948. Printed later. Signed by Karsh in full beneath the image on photographer's mount. With Karsh's original calling "card" - a 4x10 inch cardboard slip - included. Image: 8x9 inches. Framed to an overall size of 12x15 inches. Fine condition. (Inventory #: 2327)
$5,000.00 add to cart or Buy Direct from
Manhattan Rare Book Company
Share this item