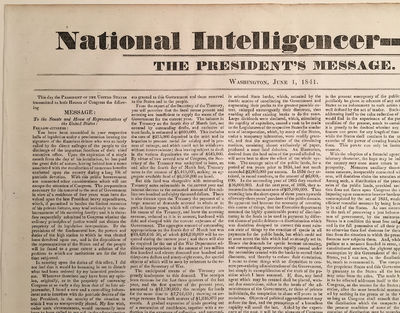 by JOHN TYLER
"The States are emphatically the constituents of this Government...." JOHN TYLER.
Broadside. State of the Union Message. National Intelligencer—Extra, June 1, 1841. Washington, DC: Gales and Seaton. 1 p., 18 x 23 in.
William Henry Harrison took office in 1841 while the nation was still suffering from a depression sparked by the Panic of 1837, causing many banks to fail and unemployment to reach then-record levels. Though Harrison took ill almost immediately after giving his lengthy March 4 inaugural address, on March 17 he summoned Congress into a special session that would convene on May 31, 1841. On April 4, Harrison became the first President to die in office. John Tyler delivered his own inaugural address on April 9, but opponents in Congress, including John Quincy Adams, refused to accept Tyler's claim to be president and considered him instead the "acting president," arguing that he had to follow Harrison's policies.

When Congress convenes, it appoints a joint committee "to wait on the President" and signal their readiness to receive any communications. Opponents of Tyler used the occasion to attempt to strike the word "President" and insert "Vice-President, now exercising the office of the President." Both houses rejected the change, however, effectively settling the issue. (The Twenty-fifth Amendment to the Constitution, adopted in 1967, finally made it explicit.)

Tyler responded with this message to Congress the next day, June 1, 1841. After paying homage to Harrison, he updates Congress briefly on foreign relations before turning to the economy, money supply, and government finance. Tyler proposed a slightly higher tariff, a new bankruptcy law, and an emergency measure to distribute to the states revenue from federal sales of public lands. As Tyler makes clear in this address, he was committed to jealously guarding states' rights against any intrusion by the federal government. He soon parted ways with the majority of Whigs, and twice vetoed Senator Henry Clay's national banking act. In September 1841, all of Tyler's cabinet except Secretary of State Daniel Webster resigned, thinking that would force Tyler out of office. Tyler appointed a new cabinet of Whigs and Democrats opposed to Clay.

"You have been assembled in your respective halls of legislation under a proclamation bearing the signature of the illustrious citizen who was so lately called by the direct suffrages of the people to the discharge of the important functions of their chief executive office. Upon the expiration of a single month from the day of his installation he has paid the great debt of nature… By the provisions of the fundamental law, the powers and duties of the high station to which he was elected have devolved upon me…

"My first wish under such circumstances would necessarily have been to have called to my aid in the administration of public affairs the combined wisdom of the two Houses of Congress, in order to take their counsel and advice as to the best mode of extricating the Government and the country from the embarrassments weighing heavily on both."

"I am happy to say that I see nothing to destroy the hope of being able to preserve peace."

"We hold out to the people of other countries an invitation to come and settle among us as members of our rapidly growing family, and for the blessings which we offer them we require of them to look upon our country as their country and to unite with us in the great task of preserving our institutions and thereby perpetuating our liberties."

"If paper [money] be used as the chief medium of circulation, and the power be vested in the Government of issuing it at pleasure, either in the form of Treasury drafts or any other, or if banks be used as the public depositories, with liberty to regard all surpluses from day to day as so much added to their active capital, prices are exposed to constant fluctuations and industry to severe suffering.... Stocks of all sorts rapidly decline, individuals are ruined, and States embarrassed even in their efforts to meet with punctuality the interest on their debts. Such, unhappily, is the condition of things now existing in the United States."

"If, then, any fiscal agent … shall be placed, without due restrictions, either in the hands of the administrators of the Government or those of private individuals, the temptation to abuse will prove to be resistless.... Aided by the experience of the past, it will be the pleasure of Congress so to guard and fortify the public interests in the creation of any new agent as to place them, so far as human wisdom can accomplish it, on a footing of perfect security."

"in the short period of eight years the popular voice may be regarded as having successively condemned each of the three schemes of finance to which I have adverted…. The late contest, which terminated in the election of General Harrison to the Presidency, was decided on principles well known and openly declared, and while the subtreasury received in the result the most decided condemnation, yet no other scheme of finance seemed to have been concurred in."

"In reflecting on the proper means of defending the country we cannot shut our eyes to the consequences which the introduction and use of the power of steam upon the ocean are likely to produce in wars between maritime states."

"Separated as we are from the countries of the Old World, and in much unaffected by their policy, we are happily relieved from the necessity of maintaining large standing armies in times of peace."

"Unless persons every way trustworthy are employed in the public service, corruption and irregularity will inevitably follow."

"I shall also at the proper season invite your attention to the statutory enactments for the suppression of the slave trade, which may require to be rendered more efficient in their provisions. There is reason to believe that the traffic is on the increase.... The highest considerations of public honor as well as the strongest promptings of humanity, require a resort to the most vigorous efforts to suppress the trade."

Tyler later sent a regular annual message to Congress (State of the Union address) on December 7, 1841, when it reconvened for its regular session.

John Tyler (1790-1862) was born in Virginia and graduated from the College of William and Mary in 1807. His father was, at the time, the governor of Virginia. The younger Tyler started a law practice in Richmond, and served in the U.S. House of Representatives from 1816 to 1821, as Virginia governor from 1825 to 1827, and as U.S. Senator from 1827 to 1836. In 1841, he became the tenth President of the United States and the first president to be elevated to office from the vice presidency, when William Henry Harrison died after only a month in office. Dubbed "His Accidency" by critics, Tyler charted his own course as president, leading to vetoes, Cabinet resignations and an impeachment attempt. Tyler retired to his Virginia plantation, Sherwood Forest. In February 1861, he chaired a convention in Washington to avert civil war but disapproved of the convention's proposed resolutions and then presided over the Virginia Secession Convention. He later served in the Provisional Confederate Congress until his death.

National Intelligencer (1800-1870) was a prominent newspaper published in Washington, DC. In 1800, Thomas Jefferson, then vice president and a candidate for the presidency, persuaded Samuel Harrison Smith, the publisher of a Philadelphia newspaper, to open a newspaper in Washington, the new capital. Smith began publishing the National Intelligencer, & Washington Advertiser
three times a week on October 31, 1800. In 1809, Joseph Gales (1786-1860) became a partner and took over as sole proprietor a year later. From 1812, Gales and his brother-in-law William Winston Seaton (1785-1866) were the newspaper's publishers for nearly fifty years. From 1813 to 1867, it was published daily as the Daily National Intelligencer
and was the dominant newspaper of the capital. Supporters of the administrations of Thomas Jefferson, James Madison, and James Monroe, Gales and Seaton were the official printers of Congress from 1819 to 1829. From the 1830s to the 1850s, the National Intelligencer was one of the nation's leading Whig newspapers, with conservative, unionist principles. (Inventory #: 25676)
$1,900.00 add to cart Available from Seth Kaller
Share this item