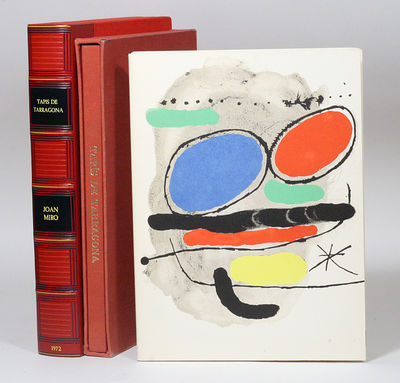 by MIRÓ, JOAN
Barcelona: Sala Gaspar, 1972. FIRST EDITION. Chemise, slipcase, box. Fine. EXTREMELY RARE SIGNED LIMITED FIRST EDITION, THE COMPLETE SET OF TEN STUNNING LARGE COLOR LITHOGRAPHS (EIGHT DOUBLE PAGE), PROVIDING A VISUAL NARRATIVE DOCUMENTING THE CREATION OF ONE OF MIRÓ'S MASTERPIECES, THE TARRAGONA TAPESTRY. ONE OF ONLY 100 COPIES SIGNED BY MIRÓ. The Tarragona Tapestry was one of Miró's most ambitious works. Originally conceived of as a gift to the doctor who treated Miró's daughter after she was hit by a train, the project grew to monumental proportions, ultimately expanding to a size of 2.80 x 4.20 meters, and requiring an innovative approach developed by Miró and the young artist Josep Royo for its creation. With stunning bright colors, the lithographs in this collection beautifully recreate the images on the tapestry. With background text in Catalan, Spanish, French, and English, by Josep Royo, Dr. Rafel Orozco (who treated Miró's daughter), and art critic Maria Lluisa Borràs. Complete with eight double-page lithographs and two single-page lithographs serving as the wrappers. Barcelona: Sala Gaspar, 1972. Fifteen large (17x 11.75 inches) single-folded sheets loose in lithographic self-wrapper, original cloth chemise and slipcase. Housed in a spectacular custom box by book artist Sjoerd Hofstra. Light general wear to slipcase and chemise, otherwise fine. RARE. (Inventory #: 2329)
$9,500.00 add to cart or Buy Direct from
Manhattan Rare Book Company
Share this item