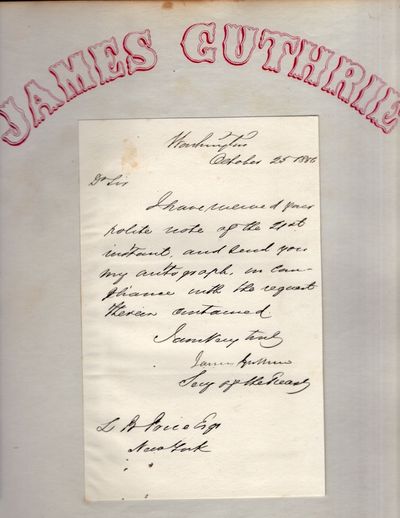 From wikipedia: James Guthrie (December 5, 1792 - March 13, 1869) was a Kentucky lawyer, plantation owner, railroad president and Democratic Party politician. He served as the 21st United States Secretary of the Treasury under President Franklin Pierce, and then became president of the Louisville and Nashville Railroad. After serving, part-time, in both houses of the Kentucky legislature as well as Louisville's City Council before the American Civil War (and failing to win his party's nomination in the Presidential election of 1860), Guthrie became one of Kentucky's United States Senators in 1865 (until resigning for health reasons in 1868 shortly before his death). Although Guthrie strongly opposed Kentucky's secession from the United States and attended the Peace Conference of 1861, and sided with the Union during the Civil War, he declined President Abraham Lincoln's offer to become the Secretary of War. As one of Kentucky's Senators after the war, Guthrie supported President Andrew Johnson and opposed Congressional Reconstruction. (Inventory #: 18492)
$125.00 add to cart or Buy Direct from Americana Books
Share this item

Lightning at Hoover's Gap: The Story of Wilder's Brigade

Genealogy as Pastime and Profession

New Haven, CT : The Tuttle, Morehouse & Taylor Company , 1930
(click for more details about Genealogy as Pastime and Profession)
View all from this seller>