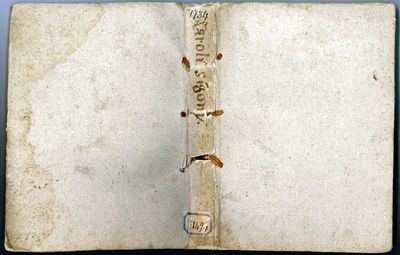 by SIGONIO, Carlo (1524-1584)
AN EXCEPTIONAL COPY ENTIRELY UNOPENED
4to (220x158 mm). [4], 123, [1] leaves. Collation: +4 A-Z4 Aa-Hh4. Leaves +4 and Hh4 are blank. Printer's device on title page. Contemporary cardboards "alla rustica", spine with ink title and the later shelf mark "1734" and, on a label, "1494". On the front flyleaf engraved bookplate Antonia Suardi Ponti. Some quired browned, some marginal foxing, a bit loose and with the binding partially detached from the book block, but an exceptional copy entirely uncut and unopened.

FIRST EDITION in Latin (an Italian translation appeared in Genoa in 1598), published posthumously, of the first biography of the great Genovese condottiero
and imperial admiral Andrea Doria (1466-1560), who fought for the emperor Charles V in the wars against the king of France Francis I and commanded several expeditions against the Ottoman Empire between 1530 and 1541.
Carlo Sigonio, from Modena, first studied Greek under Francesco Porto da Crotone, then attended the philosophical schools of Bologna and Padua. In 1545 he was made professor of Greek in his hometown. In 1552 he was called to teach in Venice, in 1560 he obtained the chair of eloquence in Padua, and then from 1563 onwards he taught in Bologna. The great reputation that he acquired with his works on Greco-Roman antiquities, was only affected in the last years of his life by the controversy that arose around the Consolatio Ciceronis, a forgery that he made from some original fragments of Cicero.
Edit 16, CNCE30866. (Inventory #: 60)
$1,350.00 add to cart Available from Govi
Share this item