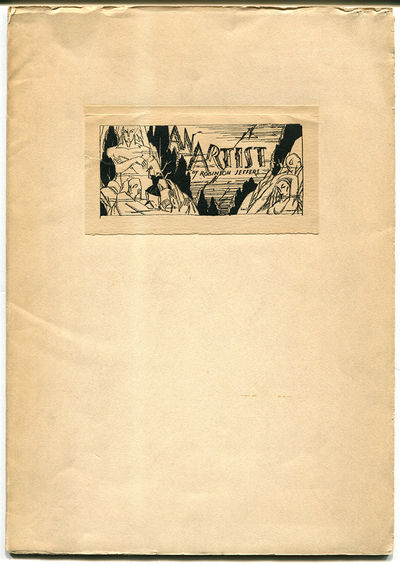 by Jeffers, Robinson
[Austin, TX]: Privately printed by John S. Mayfield, 1928. First edition. One of only 96 copies of this very fragile item containing the first appearance of Jeffers' poem, "An Artist." Precedes its appearance in CAWDOR by three days. Includes half-tone frontis portrait of Jeffers; "Robinson Jeffers: The Man" by Benjamin DeCasseres; letter from Havelock Ellis; bibliography compiled by R.H. Griffith; brief note by Jeffers; and facsimile of a portion of the original manuscript. Wove paper throughout; wrappers are of white Buckeye Text. Frontispiece is on coated paper and tipped in. Though Alberts reported there were 200 copies printed, the colophon states, "Strictly limited to an edition of ninety-six copies" and Mayfield himself confirmed there were only 96 copies in total to George M. "Marty" Barringer (then of Georgetown University Lauinger Library Special Collections), a family friend and collector. Merle Johnson, p. 291 states "...bulk of the edition is said to be either wholly destroyed or damaged by fire," perhaps accounting for the discrepancy A little soiled and worn but still very good. Housed in owner's hand-fashioned plain red slipcase. Nearly half of the copies appear to be in libraries per OCLC. Understandably rare. [Broomfield A8]. (Inventory #: 55971)
$6,000.00 add to cart or Buy Direct from Quill & Brush
Share this item

We accept checks in U.S. dollars, PayPal, and all major credit cards.
More from this seller

Pasadena : The Flame Press , 1930
(click for more details about STARS)
View all from this seller>