[A set of four ornithological prints] 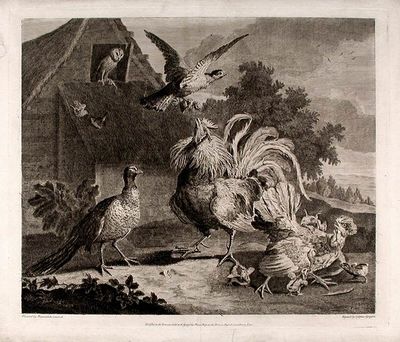 Cradock was born at Somerton, near Ilchester, in Somerset in about 1660. He was apprenticed to a house painter in London, but at the end of the apprenticeship turned to painting animals, birds and still life. His success with private patrons was limited and, in the main, he produced pictures for dealers. The DNB describes his work for Josephus Sympson as being `very spirited' and notes that it was not until after his death that the 'merits of his pictures were recognised, and they rose in value'. Walpole praised some of his work, and examples are included in Lord Derby's famous collection at Knowsley and the Yale Centre for British Art. The subjects of the plates are as follows: 1. A kestrel (?) carries off a chick, whilst a cock and hen and their four remaining chicks take flight, looking on are a pea-hen (?) and a barn owl, whilst a wren and a tit squabble on a roof nearby. 2. A cock pheasant stands guard on a stump, a juvenile pheasant makes off with an ear of corn, at a stream close by two kingfishers perch, on the banks of the stream a family of ducks (a drake, the female and 4 ducklings) feed, above them a third kingfisher flies off, in the background a duck sits on her nest. 3. A pigeon stands on a block of masonry, watched by a tit, a robin and a second pigeon, a short-tailed parrot perches on a nearby branch, above a pair of lapwings. 4. A woodpecker returns to the nest-hole to be greeted by its mate, on a nearby branch three sparrows perch, to the right of them are a pair of swallows and a fourth sparrow preening itself. (Inventory #: 3547)
$4,000.00 add to cart or Buy Direct from
Donald A. Heald Rare Books
Share this item
Donald A. Heald Rare Books
Offered by