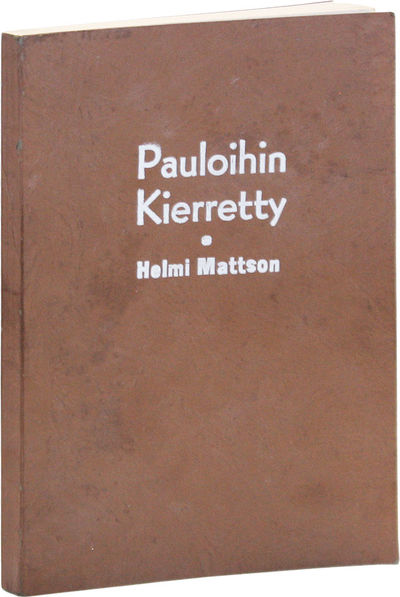 by [FINNISH-AMERICANS] MATTSON, Helmi
Superior, WI: Työmies Society Print, 1949. First Edition. A socialist novel of Finnish-American immigrant life -- the title translates literally as "Twisted Paul" -- by one of the leading Finnish-language left-wing literary voices in the United States. Helmi Dagmar Mattson (1890-1974) emigrated to Manitoba around 1910, later settling successively in International Falls, Minnesota, New York City, and Kelso, Washington. In addition to a prolific career as a poet and novelist, Mattson was the long-time editor of Toveritar, the official women's organ of the Finnish-language Socialist Federation; she also helped found the Pohjoislannen Suomalainen Historiaseura (Northwestern Finnish Historical Society) in 1961. Her papers are at the University of Minnesota. Like all of Mattson's work published with the Finnish socialist publishing house Tyómies Society Print, this title is uncommon, with seven scattered locations in OCLC. Octavo. Printed, textured card wrappers; 111pp. Slight toning to text block, a bit of creasing to text at upper corner; still a sound, attractive copy, Very Good or better. (Inventory #: 47463)
$65.00 add to cart or Buy Direct from
Lorne Bair Rare Books
Share this item