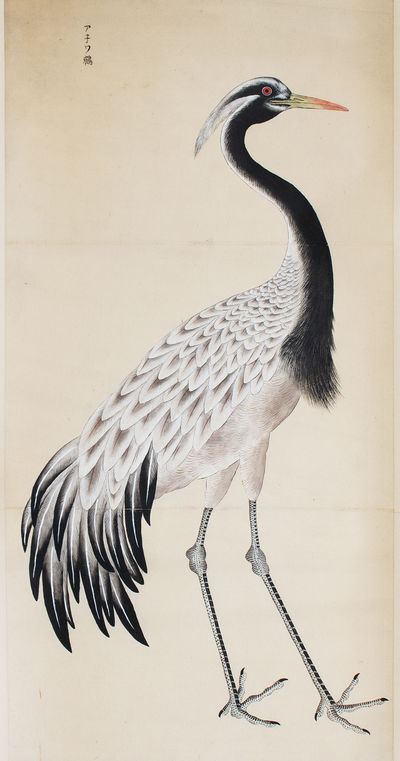 by YAMAMOTO, Akio (or Keigu)
Scroll (420 x 12,000 mm.), with elaborate silk brocade endpaper at beginning. [Japan]: 1880-86. This beautifully rendered scroll of natural history paintings was executed, with one exception, by Akio (or Keigu) Yamamoto (1827-1903), Confucian scholar, doctor, botanist, and highly gifted artist. He was born in Kyoto, the son of the prominent doctor and botanist Boyo Yamamoto (1778-1859), the direct disciple of Ono Ranzan (1729-1810), the famous professor of botany who wrote a series of classic botanical books. Keigu "continued his father's work in his private school in Osaka and spent his time organizing meetings that were regularly attended by both honzogaku amateurs and Japanese biologists."-Federico Marcon, The Knowledge of Nature and the Nature of Knowledge in Early Modern Japan, p. 301. Keigu travelled widely throughout Japan, drawing plants and animals. He gave botanical instruction to the Meiji emperor and other members of the royal family. Keigu also wrote several standard works on materia medica and left many sketch books and scrolls, which entered the Kyoto rare book trade in 1932; some of these were published only in the 1980s. All of his sketch books and scrolls offered valuable and unique information regarding native plants and animals as well as those that had been introduced into Japan. Our scroll contains 14 very finely executed color paintings of plants, birds, and animals. The paintings are quite unique in their remarkable spaciousness. For instance, the image of the octopus is 1410 mm. long. The images include a most unusual morning glory (three joined sheets and 1190 mm. long); an edible yellow lily (two joined sheets, 800 mm.); an ungei flower (two joined sheets, 795 mm.); a magnificent red toki (a now-endangered crane species, three joined sheets, 765 mm.); a large akowa tsuru (another species of crane, three joined sheets, 815 mm.); a young white crane (three joined sheets, 935 mm.); a sea lion (umiuso) painted in many shades of delicate black (two joined sheets, 545 mm.); a carp (two joined sheets, 597 mm.); an octopus (four joined sheets); a chameleon (three joined sheets, 844 mm., dated "1880"); a deer antler (two sheets, 545 mm.); a "Dutch" dog (two sheets, 545 mm.); a lion seen at exhibitions in Tokyo and Kyoto (two sheets, 640 mm., with a seal and note stating this was the work of "Ariyoshi," dated "1886"); and two camels (two sheets, 545 mm. long). Four of the paintings have the signature and seal of Yamamoto, and another painting - the final - has the seal only. Three of the paintings have additional text by Yamamoto regarding where seen and painted, alternative regional names, date, etc. Very fine condition, preserved in a new wooden box. All but the penultimate painting are the work of Yamamoto. (Inventory #: 6952)
$13,500.00 add to cart or Buy Direct from
Jonathan A. Hill, Bookseller
Share this item
Jonathan A. Hill, Bookseller, Inc.
Offered by