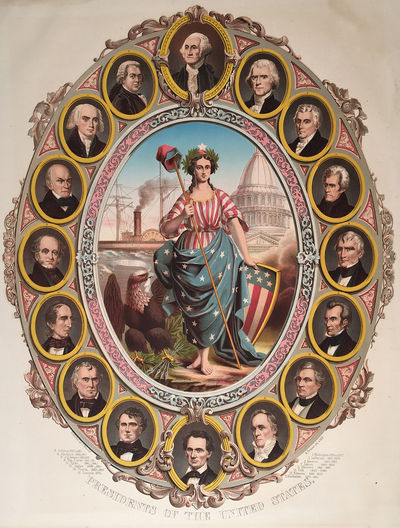 by [ABRAHAM LINCOLN]
[ABRAHAM LINCOLN].
Chromolithograph. Presidents of the United States, [Philadelphia]: Published by F. Bouclet, lithographed by A. Feusier. Sheet size: 21 in. x 27 in. Image size: 24½ in. x 18¾ in.
A large, patriotic chromolithograph, issued around the time of Abraham Lincoln's first inauguration. The central image is the goddess Columbia wearing a draped American flag, flanked by bald eagle and Union shield. Behind her is a steam ship and the artist's rendition of what the then-uncompleted Capitol building was expected to look like. Surrounding Columbia is an ornate frame made up of portraits of the presidents of the United States from 1789-1861—including a beardless Abraham Lincoln: George Washington, John Adams, Thomas Jefferson, James Madison, James Monroe, John Quincy Adams, Andrew Jackson, Martin Van Buren, William H. Harrison, John Tyler, James K. Polk, Zachary Taylor, Millard Fillmore, Franklin Pierce, James Buchanan, and Abraham Lincoln.

Erin Mast, curator of "My Abraham Lincoln," (a 2009 exhibition at President Lincoln's Cottage Museum) noted that the print "both commemorates Lincoln's election and recognizes the challenges and opportunities facing the 16th president... The 16 presidential portraits encircle symbols of the republic at a time when a divided nation faced secession and civil war. In the center, Columbia holds a shield and liberty cap, the latter being a symbol both of revolution and of freed slaves. A bald eagle grasps arrows and an olive branch and carries a ribbon with the motto 'E Pluribus Unum.' The Capitol dome (shown completed at a time when it was still unfinished) symbolizes the founding of the democratic republic while a steamship symbolizes development and progress. The allegorical images relate to concepts that Lincoln expressed in his first inaugural address; that seceding and breaking the Constitution, would be a step backward, not forward, and violates the very principles of the Union, a Union which is 'older than the Constitution.' By commemorating Lincoln's election and illustrating the troubled and complex scene he faced, this chromolithograph encapsulates the spirit of Lincoln's presidency."

From the Estate of Malcolm S. Forbes.