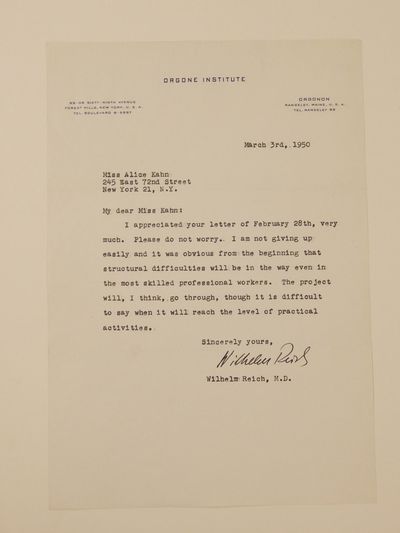 by REICH, Wilhelm (1897-1957)
Orgone Institute, 1950. unbound. very good. Rare T.L.S. 1 page, Orgone Institute, Forest Hills - New York and Rangeley, ME, March 3rd 1950, written just weeks before he would abandon New York City in favor of his laboratory and compound in Rangeley, to his friend and colleague Alice Kahn, the future Dr. Alis Kahn Ladas, a pioneer of Women's Liberation, Sexology, Body Psychotherapy and Bioenergetic Analysis, expressing his frustration in overcoming the difficulties in expanding his compound in Rangeley, in full: "I appreciated your letter of February 28th, very much. Please do not worry. I am not giving up easily and it was obvious from the beginning that structural difficulties will be in the way even in the most skilled professional workers. The project will, I think go through, though it is difficult to say when it will reach the level of practical activities." *The Alice Kahn Ladas papers (1943-2013) are currently housed in the Division of Rare Manuscripts at Cornell University, but surprisingly they possess not a single letter of Wilhelm Reich to Alice Kahn. Boldly signed and in excellent condition. Controversial Austrian psychoanalyst, and friend and associate of Sigmund Freud; his later work included the claim of discovering "Orgone Energy", sold to the public as the "Orgone Accumulator". (Inventory #: 295318)
$1800.00 add to cart or Buy Direct from
Argosy Book Store
Share this item