Asa Turner. A Home Missionary Patriarch and His Times 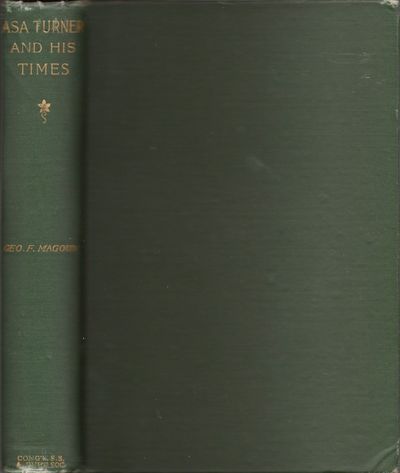 by Magoun, George F.
Boston: Congregational Sunday School and Publishing Society, 1889. First Edition. Hardcover. Very good. Octavo. [2], 345 pages. Illustrated. Green cloth hardcover with gilt title on spine. Front hinge slightly cracked. Light edge wear to the cloth extremities. Previous owner name on front paste down. From the National Park Service: The Denmark Congregational Church in Denmark, Iowa, organized in 1838, is the oldest Congregational Church west of the Mississippi River. Part of the current building was constructed in 1845. The New England Congregationalists who settled Denmark called Reverend Asa Turner from Quincy, Illinois, to be their minister. Turner was well known there for his anti-slavery activities. From the beginning, the church and its members actively worked against slavery. Church records from March 22, 1856 state "it has been the habit of the church since the first, to hold also on the last Sabbath evening of each month, a prayer meeting in behalf of the slave and a collection frequently to assist in the deliverance of the same." Documentation and local tradition have church members actively involved in the Underground Railroad. The first Anti-Slavery Society in Iowa was established here on January 1, 1840, by church members and Reverend Turner. This early and continuing role established the Denmark Congregational Church as the leader in the anti-slavery movement in Eastern Iowa. (Inventory #: 18520)
$250.00 add to cart or Buy Direct from Americana Books
Share this item

Open the Gate and Roam Cabarrus With Us